This article is about Hebrew and Aramaic texts that constitute Jewish scripture. For the Jewish canon, see Tanakh. For the major textual tradition, see Masoretic Text. For their use in the Christian Bible, see Old Testament. For the series of modern critical editions, see Biblia Hebraica. 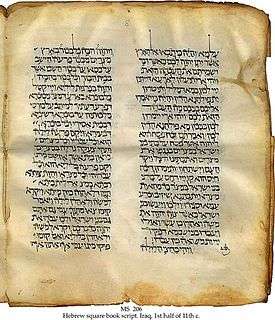 Page from an 11th-century Aramaic Targum manuscript of the Hebrew Bible.

Hebrew Bible or Hebrew Scriptures (Latin: Biblia Hebraica) is the term used by biblical scholars to refer to the Tanakh (Hebrew: תנ"ך‎‎; Latin: Thanach), the canonical collection of Jewish texts, which is the common textual source of several canonical editions of the Christian Old Testament. They are composed mainly in Biblical Hebrew, with some passages in Biblical Aramaic (in the books of Daniel, Ezra and a few others).

The content to which the Protestant Old Testament closely corresponds does not act as a source for the deuterocanonical portions of the Roman Catholic or to the Anagignoskomena portions of the Eastern Orthodox Old Testaments. The term does not comment upon the naming, numbering or ordering of books, which varies with later Christian biblical canons.

The term Hebrew Bible is an attempt to provide specificity with respect to contents but avoid allusion to any particular interpretative tradition or theological school of thought. It is widely used in academic writing and interfaith discussion in relatively neutral contexts meant to include dialogue among all religious traditions but not widely in the inner discourse of the religions that use its text.[1]

Hebrew Bible refers to the Jewish biblical canon. In its Latin form, Biblia Hebraica, it traditionally serves as a title for printed editions of the Masoretic Text. Many biblical studies scholars advocate use of the term "Hebrew Bible" (or "Hebrew Scriptures") as a neutral substitute to terms with religious connotations (e.g., the non-neutral term "Old Testament").[2][3] The Society of Biblical Literature's Handbook of Style, which is the standard for major academic journals like the Harvard Theological Review and conservative Protestant journals like the Bibliotheca Sacra and the Westminster Theological Journal, suggests that authors "be aware of the connotations of alternative expressions such as... Hebrew Bible [and] Old Testament" without prescribing the use of either.[4]

In terms of theology, Christianity has struggled with the relationship between "Old" and "New" Testaments from its very beginnings.[5][6] Modern Christian formulations of this tension include Supersessionism, Covenant Theology, New Covenant Theology, Dispensationalism and Dual-covenant theology. All of these formulations, except some forms of Dual-covenant theology, are objectionable to mainstream Judaism and to many Jewish scholars and writers, for whom there is one eternal covenant between God and the Israelites, and who therefore reject the term "Old Testament" as a form of antinomianism.

In terms of canon, Christian usage of "Old Testament" does not refer to a universally agreed upon set of books but, rather, varies depending on denomination. Lutheranism and Protestant denominations that follow the Westminster Confession of Faith accept the entire Jewish canon as the Old Testament without additions, however in translation they sometimes give preference to the Septuagint rather than the Masoretic Text; for example, see Isaiah 7:14.

In terms of language, "Hebrew" refers to the original language of the books, but it may also be taken as referring to the Jews of the Second Temple era and Jewish diaspora, and their descendants, who preserved the transmission of the Masoretic Text up to the present day. The Hebrew Bible includes small portions in Aramaic (mostly in the books of Daniel and Ezra), written and printed in Aramaic square-script, which was adopted as the Hebrew alphabet after the Babylonian exile.

Origins of the Hebrew Bible and its components

Main articles: Dating the Bible and Development of the Hebrew Bible canon

The books that constitute the Hebrew Bible developed over roughly a millennium. The oldest texts seem to come from the eleventh or tenth centuries BCE, whilst most of the other texts are somewhat later. They are edited works, being collections of various sources intricately and carefully woven together.

Since the nineteenth century, most scholars have agreed that the Pentateuch (the first five books of Scriptures) consists of four sources which have been woven together. These four sources are J (Yahwist), D (Deuteronomist), E (Elohist) and P (Priestly) sources. They were combined to form the Pentateuch sometime in the sixth century BCE. This theory is now known as the documentary hypothesis, and has been the dominant theory for the past two hundred years.[7] The Deuteronomist credited with the Pentateuch's book of Deuteronomy is also said to be the source of the books of Joshua, Judges, Samuel, and Kings (the Deuteronomistic history, or DtrH) and also in the book of Jeremiah.

Several editions, all titled Biblia Hebraica, have been produced by various German publishers since 1906.