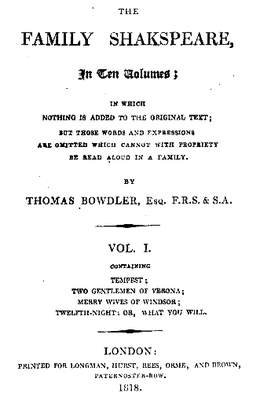 Bowdler was born in Conington, Huntingdonshire, the daughter of Thomas and Elizabeth Stuart Bowdler, and sister of John Bowdler the elder and Thomas Bowdler the elder. Her sister Jane was the author of an anonymous, posthumously published series of religious Poems and Essays, (2 vols., Bath, 1786), which passed through a large number of editions. Harriet's own Sermons on the Doctrines and Duties of Christianity appeared anonymously, and passed through nearly fifty editions. Beilby Porteus, bishop of London, believed them to be from the pen of a clergyman, and is said to have offered their author, through the publishers, a living in his diocese.

Harriet Bowdler is also thought to have done most of the editing of the first expurgated edition of Shakespeare's works, The Family Shakspeare (1807).[1] She removed anything which seemed irreverent or immoral, deleting about 10 per cent of the original text. The work was published under the name of her brother, Thomas Bowdler, after whom this type of treatment came to be known as bowdlerisation.[2]

In 1810 Bowdler edited Fragments in Prose and Verse by the late Miss Elizabeth Smith, which was very popular in religious circles. A novel by Bowdler entitled Pen Tamar, or the History of an Old Maid, was issued shortly after her death. Bowdler died at Bath on 25 February 1830.[3]

Although it is unclear whether she was a regular member of the Blue Stockings Society, there has survived a description of Harriet as a young lady by Gilbert Elliot, earl of Minto: "She is, I believe, a blue-stocking, but what the colour of that part of her dress is must be mere conjecture, as you will easily believe when I tell you that … she said she never looked at [the dancers in operas] but always kept her eyes shut the whole time, and when I asked her why, she said it was so indelicate she could not bear to look."[4]