The Herald Sun is a morning tabloid newspaper based in Melbourne, Australia. It is published by The Herald and Weekly Times, a subsidiary of News Corp Australia, itself a subsidiary of News Corp. It is available for purchase throughout Melbourne, regional Victoria, Tasmania, the Australian Capital Territory and border regions of South Australia and Southern New South Wales such as the Riverina and NSW South Coast. The Herald Sun primarily serves Victoria and shares many articles with other News Corporation paid daily newspapers, especially those from Australia.

The Herald Sun newspaper was established in 1990 as an amalgam of the morning tabloid paper The Sun News-Pictorial with its afternoon broadsheet sister paper The Herald. It was first published on 8 October 1990 as the Herald-Sun. The hyphen in its title was later dropped; the last hyphenated masthead appeared on 1 May 1993. The hyphen was dropped as part of a desire to drop the overt reminder of the paper's two predecessors that the hyphen implied and also by the fact that by 1993 most of the columns and features inherited from The Herald and The Sun News-Pictorial had either been discontinued or subsumed completely in new sections.[2] In March 2009, the paper had a circulation of 530,000 from Monday to Friday.[3] 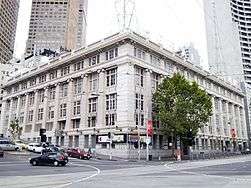 The old Herald and Weekly Times building in Flinders Street.

The Melbourne Arts Centre Spire viewed from behind the rooftop signage for the Herald and Weekly Times building.

The Herald was founded on 3 January 1840 by George Cavenagh as the Port Phillip Herald. In 1849, it became The Melbourne Morning Herald. At the beginning of 1855, it became The Melbourne Herald before settling on The Herald from 8 September 1855 - the name it would hold for the next 135 years. From 1869, it was an evening newspaper. Colonel William Thomas Reay was sometime literary editor and later associate editor, before becoming managing editor in 1904. When The Argus newspaper closed in 1957, The Herald and Weekly Times bought out and continued various Argus media assets.[4] In 1986, The Herald's Saturday edition - The Weekend Herald - which had adopted a tabloid format, in order to distinguish it from the Monday to Friday editions' broadsheet format - was closed.

The Sun News-Pictorial was founded on 11 September 1922, and bought by The Herald and Weekly Times in 1925.

In its heyday, The Herald had a circulation of almost 600,000, but by the time of its 150th anniversary in 1990, with the impact of evening television news and a higher proportion of people using cars to get home from work rather than public transport, The Herald's circulation had fallen below 200,000. This was much less than that of the morning Sun.

With the only alternative option being closing The Herald, The Herald and Weekly Times decided to merge the two newspapers, and so after one hundred and fifty years, ten months and two days of publication, The Herald was published for the last time as a separate newspaper on 5 October 1990. The next day, The Sun News-Pictorial published its last edition. The Sunday editions of the two newspapers, The Sunday Herald and The Sunday Sun, were also merged to form the Sunday Herald Sun. The resulting newspaper had both the size and style of The Sun News-Pictorial. Bruce Baskett, the last Editor of The Herald, was the first Editor of the Herald Sun.

After a progressive decline in circulation the afternoon edition was cancelled, the last edition being published on 21 December 2001.[5] The News Corp Australia-produced mX had filled part of that gap, being freely distributed of an afternoon from stands throughout the Melbourne CBD until 12 June 2015, though generally not available outside that area.

The Herald Sun is the highest-circulating daily newspaper in Australia, with a weekday circulation of 515,000 and readership of 1,500,000.[7]

Over the years, the Herald Sun has had a range of magazines, pins and memorabilia (usually with an outside partner) that could be obtained by either getting it out of the newspaper, or using a token from the newspaper to collect or purchase the item. Items that have been a part of this scheme include:

Shortly before the 2004 election, the Herald Sun published an article entitled "Greens back illegal drugs" (Herald Sun, 31/8/2004) written by Gerard McManus which made a number of claims about the Australian Greens based on their harm minimisation and decriminalisation policies posted on their website at the time. The Greens complained to the Australian Press Council. The text of their adjudication reads:

In the context of an approaching election, the potential damage was considerable. The actual electoral impact cannot be known but readers were seriously misled. [...] The claims made in the original article were seriously inaccurate and breached the Council's guiding principles of checking the accuracy of what is reported, taking prompt measures to counter the effects of harmfully inaccurate reporting, ensuring that the facts are not distorted, and being fair and balanced in reports on matters of public concern.[11]

In June 2007, two Herald Sun journalists, Michael Harvey and Gerard McManus, were found guilty in the Victorian County Court of contempt of court after refusing to disclose the source of a story the pair wrote in the Herald Sun on Australian Government plans to scale back proposed veterans entitlements. The controversy resulted in agitation to change the law to introduce "shield laws" in Australia to take into consideration the journalists' code of ethics.[12]