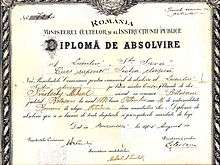 A high school diploma is a North American academic school leaving qualification awarded upon high school graduation. The high school diploma is typically studied for over the course of four years, from Grade 9 to Grade 12. The diploma is typically awarded by the school in accordance with the requirements of the local state or provincial government. Requirements for earning the diploma vary by jurisdiction, and there may be different requirements for different streams or levels of high school graduation. Typically they include a combination of selected coursework meeting specified criteria for a particular stream and acceptable passing grades earned on the state exit examination.

The current Dogwood requirements have been in place since July 1, 2004.[1] Under current regulations, students must earn a minimum of 80 credits to graduate, which must include 48 credits for required courses, a minimum of 28 elective credits, and 4 credits for "graduation transitions", a standards-based assessment evaluated by schools under BC Ministry of Education guidelines.[1] Required courses include, among other things, language arts, social studies, mathematics, and science courses in grades 10, 11, and 12. Part of the evaluation of students includes standardized provincial examinations in a number of the required courses in grades 10 and 12. As part of the 80 credits for the Dogwood, 16 credits must be at the Grade 12 level, and must include English 12 or Communications 12.

A United States high school diploma usually refers to the satisfactory completion of grade schooling including kindergarten through the 12th grade and is then issued by the school district and the high school after a student's graduation.

In California, students are required to take, and successfully complete the following minimum requirements to earn a high school diploma: 4 years of English, 2 years of Math including Algebra I, 3 years of History/Social Studies including one year of U.S. history and geography; one year of world history, culture, and geography; one semester of American government and civics, and one semester of economics, 2 years of science including biological and physical sciences, 1 year of either visual and performing arts, foreign language, or career technical education, 2 years of Physical Education, and Beginning in 2005–06, all students must pass the California High School Exit Examination prior to graduation, which is normally first administered in the 10th grade. Most schools' individual graduation requirements far outweigh the state's minimum standards.

This information is taken from the California department of education .[2]

In Illinois, students are required to take English, mathematics, science, social science, world language, fine arts, physical education, and elective classes meeting selected criteria as part of the program of study for the High School Diploma. Electives may include advanced courses, career and technical education (CTE), Junior Reserve Officers' Training Corps (JROTC), dual-enrollment, or additional classes in the required subjects that meet school board requirements. Driver's Education is required for all students.[3][4] An additional requirement is a passing grade on the Prairie State Achievement Examination which is typically taken in Grade 11.[5]

Accommodations are made for select students with unique needs. English Language Learner (ELL) students may substitute English as a Second Language for English to meet the graduation requirements. Students receiving special education services may complete modified requirements according to an Individualized Education Plan (IEP).

In Texas, there are three programs offered for graduation: the Minimum High School Program (MHSP), the Recommended High School Program (RHSP), and the Advanced (Distinguished) High School Program (AHSP/DHSP).[7] The Recommended and Distinguished programs are the streams typically chosen by most students, and are expected of students who are college-bound. Also required for graduation is successful completion with passing grades on the Exit Level examination of the State of Texas Assessments of Academic Readiness (STAAR), which is typically taken in Grade 11. Multiple re-sits for the exam are available, in case of failure on a previous attempt.

By Texas state law, completion of the Recommended or Distinguished programs or a program with an equivalent curriculum and level of rigor, along with suitable scores on the SAT or the ACT, is required for a student to be eligible to be considered for admission to a four-year public institution of higher education in Texas.[9]

The General Education Development (GED) credential is offered as an alternative qualification for those who did not successfully earn a high school diploma. Examination involves taking and passing tests in five subjects: Reading, Writing, Mathematics, Science, and Social Studies. A Certificate of High School Equivalency is generally offered to those who successfully complete the GED. While the GED itself may not necessarily enable the same higher education and employment opportunities as the high school diploma, the GED can enhance employability prospects for former high school dropouts, and progression is available to tertiary study at select higher education institutions.

IB World Schools may offer the IB Diploma[10] in lieu of or alongside a traditional high school diploma. The IB Diploma is an academically rigorous program of study. The program of study for the IB Diploma includes subjects chosen from five subject groups: Studies in Language and Literature, Language Acquisition, Individuals and Societies, Sciences, Mathematics, and the Arts.[10][11] Three subjects are taken at Higher Level, and three are taken at Standard Level.[10][11] Also included is the Diploma Programme Core, which is composed of Extended Essay; Theory of Knowledge; and Creativity, Action, and Service (CAS) components.[10][11] The IB Diploma is an internationally recognized academic school-leaving qualification that provides entry to, and in some cases, advanced standing in, university. International Baccalaureate (IB) exams are typically considered equivalent to Advanced Placement (AP) exams and are at an academic level above the high school diploma, and thus university credit may be awarded for successful completion of IB subjects by American and Canadian universities as well as Universities around the World.

Students generally take five to ten subjects, according to their desired program of study and the offerings available at their school; an IGCSE with eight subjects at grades A*-C is considered equivalent to the full high school diploma. Unlike the high school diploma, which is typically studied for in years 9-12 and awarded in year 12, the IGCSE is typically awarded at year 11, after which the A Levels are studied for and awarded.

As an alternative to the Cambridge AICE Diploma, international schools following the British Curriculum may offer the Edexcel International Diploma (ID), in lieu of or alongside the traditional high school diploma, following successful completion of the GCSE or IGCSE.[13] The International Diploma requires successful completion of three Edexcel A Levels or three BTEC Level 3 Extended Diplomas, along with a Level 3 Extended Project (EPQ), a BTEC Level 3 WorkSkills Plus Certificate, and an Edexcel AS Level in General Studies.[13] This qualification thus allows for a blended mix of academic studies and vocational training, to prepare students for higher education as well as the workplace.[13] The Edexcel International Diploma would typically be completed by the final year of high school. AS and A Levels are at a higher academic level than the high school diploma, and thus university credit may be awarded for A Levels completed as part of the International Diploma by American universities.

Accredited French international schools in the United States may also offer the Baccalauréat Franco Américain (French American Baccalauréat), as an alternative to the traditional Baccalauréat, in lieu of or alongside a traditional high school diploma.[14][15] The French American Baccalauréat is offered as a joint initiative of the College Board and the French Ministry of Education.[14][15] The curriculum includes Advanced Placement (AP) subjects and French classes; in lieu of three French classes, students take three corresponding AP classes in the première (year 11) and terminale (year 12) years of high school.[14][15] AP exams are taken in May of year 11 or year 12, and French Baccalauréat exams are taken according to the normal academic calendar.[14][15] Students may elect to take the Baccalauréat Franco Américain in the Literature (L), Economics (ES), and Science (S) courses of study.[14][15]

In the [England and Wales], the high school diploma is considered to be at the level of the General Certificate of Secondary Education (GCSE), which is awarded at Year 11.[16][17] For college and university admissions, the high school diploma may be accepted in lieu of the GCSE if an average grade of C is obtained in subjects with a GCSE counterpart.[16]

As the more academically rigorous A Levels awarded at Year 13 are expected for university admission, the high school diploma alone is generally not considered to meet university requirements. Students who wish to study in the United Kingdom may additionally participate in the Advanced Placement (AP) or International Baccalaureate (IB) programs, which are considered to be at the level of the A Level qualifications and earn points on the UCAS Tariff,[16][18] or may opt to take A Level examinations in British international schools or as private candidates. College Entrance Examination Board (CEEB) tests, such as the SAT, SAT Subject Tests, or the ACT, may also be considered.