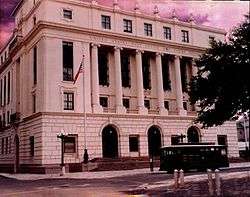 On December 19, 1979, Garcia was nominated by President Jimmy Carter to a new seat on the United States District Court for the Western District of Texas created by 92 Stat. 1629. He was confirmed by the United States Senate on September 29, 1980, and received his commission the following day. He served unto his death, in Austin, in 2002.

In 2004, the Hipolito F. Garcia Federal Building and United States Courthouse in Downtown San Antonio was named in his honor.