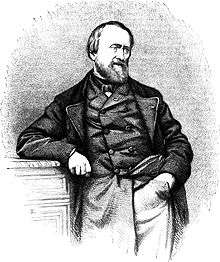 From an early age, Flandrin showed interest in the arts and a career as a painter. However, his parents pressured him to become a businessman, and having very little training, he was forced to instead become a miniature painter. 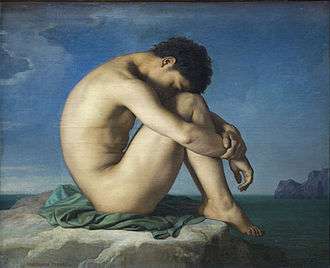 Hippolyte was the second of three sons, all of whom were painters in some aspect. Augusto, his older brother, spent most of his life as a professor at Lyon and later died there. Paul, his younger brother, was a painter of portraits and religious imagery.

Hippolyte and Paul spent some time at Lyon, saving to leave for Paris in 1829 and study under Louis Hersent. Eventually, they settled in the studio of Jean Auguste Dominique Ingres, who became not only their instructor but their friend for life. At first, Hippolyte struggled as a poor artist. However, in 1832, he won the Prix de Rome for his painting Recognition of Theseus by his Father. This prestigious art scholarship meant that he was no longer limited by his poverty. 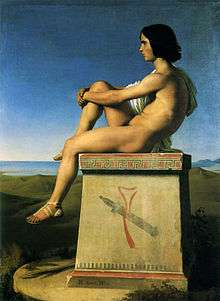 Polytès, Son of Priam, Observing the Movements of the Greeks (1833-34)

The Prix de Rome allowed him to study for five years in Rome. While there, he created several paintings, increasing his celebrity both in France and Italy. His painting St. Clair Healing the Blind was created for the cathedral of Nantes, and at the exhibition of 1855 years later, it also brought him a medal of the first class. Jesus and the Little Children was given by the government to the town of Lisieux. Dante and Virgil visiting the Envious Men struck with Blindness and Euripides writing his Tragedies are now in the Museum of Fine Arts in Lyon.

Upon his return to Paris in 1856, Flandrin received a commission from the chapel of St John in the church of St Séverin. As a result, his reputation became even more impressive, virtually guaranteeing him continuous employment for the rest of his life.

In addition to these works, Flandrin also painted a great number of portraits. However, he is much more known today for his monumental decorative paintings. The most notable of these are found in the following locations:

In 1853, Flandrin was elected to the Académie des Beaux-Arts. In 1863, his failing health, made worse by his hard work and extended exposure to the damp and draughts of churches, induced him to visit Italy again, where he died of smallpox in Rome on 21 March 1864.