The historiography of Switzerland is the study of the history of Switzerland. Up until the late 20th century, it was largely shaped by the centuries-old traditional account of the founding of the Old Swiss Confederacy through the Federal Charter of 1291 as a defensive alliance of small republics against European tyrants. More recent Swiss scholarship supplements this tradition's emphasis on political and military events with other approaches such as research into Swiss economic history, legal history and social history.[1]

Swiss historiography received substantial public attention in the 1990s, when controversy over Switzerland's conduct during World War II, triggered by a U.S. lawsuit, prompted the Swiss government to commission a much-publicised report by a board of historians. 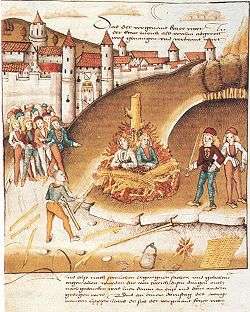 A page from the Zürcher Schilling chronicle depicting the burning of sodomites, 1482.

The earliest works of Swiss history are the battle songs and folk songs in which the earliest Confederates celebrated their deeds, as well as the illustrated chronicles written mostly in the 15th to 17th century on behalf of the authorities of the city-states of Berne and Lucerne.[2] While these chronicles were written from the point of view of the individual states, even the earliest did address issues of all-Swiss significance in some detail.[2]

With the introduction of movable type in Europe, chroniclers could reach a wider audience and begin to write about Swiss history as a whole. The 1507 Chronicle of the Swiss Confederation by Petermann Etterlin exerted great influence on later writers because, as a printed work, it was the first to be generally available.[2] Moreover, Humanist scholars such as Johannes Stumpf and Aegidius Tschudi connected the history of their time with the Roman era of Switzerland and to the accounts of the Helvetii,[3] giving a greater depth to the emerging discipline of history in Switzerland.

This development came to a close with Josias Simler's 1576 De Helvetiorum republica libri duo, a sober account of the Confederacy's constitutional status and historical background. The work remained the definitive account of Swiss political history for centuries – it saw some 30 editions up until the 18th century, and was immediately translated into German and French.[3] The rest of the world learnt of Swiss history essentially through Simler's treatise.[3]

As the Swiss city-states grew more stratified and oligarchical, and as confessional, social and political barriers became more pronounced, the 17th century saw a shift of focus in historical writing from the affairs of the Confederacy to that of the individual state.[3] The continuation of the last great work of Swiss humanist historiography, Franz Guilliman's De rebus Helvetiorum sive antiquitatum, was thwarted by partisan politics. The baroque appetite for curiosa was allayed by Matthäus Merian's great engravings.[3]

Historical research bloomed again in the time of the Enlightenment, when as early as with Johann Jakob Wagner's 1680 Historia naturalis Helvetiae curiosa, the spirit of critical inquiry took hold in Swiss scholarship.[3] Conditions were not optimal – state archives remained mostly closed to private researchers and the zeitgeist favoured a heroic interpretation of history in a less than heroic present.[4] Still, the early 18th century saw the first critical editions of ancient sources (by Johann Jakob Bodmer in 1735) and the publication of the first Swiss historical journals (Helvetische Bibliothek, also by Bodmer, and Mercure Helvétique, both in 1735).[4] The century's most significant work of historiography was the country's first historical dictionary, the 20-volume Allgemeines helvetisches eidgenössisches Lexikon in 20 volumes (1743–63), written by scholars from all cantons and edited by Johann Jakob Leu.[4]

All these works, in general, hewed closely to the popular account of the Confederacy's creation as established in the 15th and 16th century. According to that tradition, it was established in 1291 as an alliance between Uri, Schwyz and Unterwalden, the result of a patriotic uprising against Habsburg occupation, triggered by William Tell's just tyrannicide of the brutal bailiff Albrecht Gessler.[5] When the Bernese Uriel Freudenberger and Gottlieb Emanuel Haller were the first to publicly question the historicity of Tell – not really believed in any more by Enlightenment-era intellectuals – they triggered a political scandal and caused tensions between Berne and Tell's traditional home state, Uri.[5] Their 1760 book Der Wilhelm Tell. Ein dänisches Mährgen, in which they showed the Tell saga to be an adaptation of a Danish legend, was banned and burnt in public.[5] As the rationalist Enlightenment gave way to the more emotional period of Romanticism, the questioning of popular heroes grew more unpopular still,[5] and the traditional account of Tell was reestablished for generations by Friedrich Schiller's play William Tell of 1804.

The 19th century's most influential work of historiography was Johannes von Müller's epic and lively five-volume Geschichten Schweizerischer Eidgenossenschaft (1786–1806).[5] It helped Switzerland, thrown into turmoil by Napoleon's violent overthrow of the Ancien Régime and the establishment of the short-lived Helvetic Republic, to find a sense of national identity and to refound the Confederation after Napoleon's fall.[6]

The work, which did not go beyond the Swabian War of 1499 – Switzerland's war of independence – was soon continued in the works of an entire generation of historians. Robert Glutz von Blotzheim and Johann Jakob Hottinger in the German-speaking part of Switzerland as well as Louis Vuillemin and Charles Monnard in the Romandie translated and extended Müller's work, providing the new federal state founded in 1848 with a reasonably coherent common national history.[6]

Von Müller's work was eventually supplanted by Johannes Dierauer's seminal Geschichte der Schweizerischen Eidgenossenschaft (1887–1917, with extensions up until 1974), which remains indispensable to modern research thanks to its thorough critical apparatus.[7]

In the period of historicism, learning from this national history became a general preoccupation, and dozens of works of popular history – notably by the educator Heinrich Zschokke and by the liberal historian André Daguet – were published to meet this demand.[6] The democratic reforms of the 18th century caused a broadening of public education and the publication of innumerable historical textbooks.[6]

Cantonal archives along with the new Federal Archives were opened to researchers, and chairs of Swiss history were established in Swiss universities.[6] The first historical society in Switzerland was founded in 1841.[6]

An important foundation for later research was laid in the later 19th century through the edition and publication of official documents, including those of the Old Confederacy and the Helvetic Republic, in voluminous series whose publication was not completed until 1966.[8] This tradition is being continued in the ongoing publication of Swiss diplomatic archives by several Swiss universities starting in 1979.[8]

With the 17th and 18th century seen by later 19th-century historians as uninteresting periods of stagnation,[8] academic interest focused on the early history of Switzerland, whose discovery was aided by new archaeological methods, and, following European trends, on the medieval period and the Reformation.[8] The conservative Roman Catholic cantons – who had been defeated in the 1847 Sonderbund war – also received little attention from scholars situated in the liberal Protestant mainstream of the time.[8]

On the whole, Swiss historiography up until the early 20th century was focused on the political and military history of Switzerland. The liberal, Radical intellectual mainstream, which viewed Swiss history as a steady progression of liberty culminating in the founding of the 1848 federal state, was dominant.[9]

Some academic attention also shifted to the economic and social history of Switzerland, which began to be treated in substantial monographs by William Rappard and Eduard Fueter in the 1910s.[7] These developments, inspired by Anglo-American historiographical trends, were however cut short by the World Wars.[9] Attempts by non-historians including Robert Grimm to write a Socialist history of Switzerland had no impact.[9]

On the other hand, apologists of the Ancien Régime such as Gonzague de Reynold, who praised the perceived enlighted authoritarianism of the Old Confederacy, left an imprint on the generally conservative historiography of the post-World War II generation.[9] One historian, Karl Meyer, even attempted to rehabilitate the historicity of the national founding legends in a 1933 work.[10] The early Cold War period's emphasis on geistige Landesverteidigung – "intellectual defense of the country" – did also not encourage a re-thinking of Swiss history.[10]

It was only with the societal upheavals associated with the year 1968, which in Switzerland as elsewhere in the West began to move the mainstream of academic thought to the political Left, that the approach of Swiss historians began to shift again. Picking up where Rappard and Fueter had left off, historians of the 1960s and 1970s published large treatises on the social and economic history of Switzerland.[1] Adapting the newer methods of historical research in the United States, the United Kingdom and France, researchers used disciplines such as historical demographics and ecology to support their work. Inspired by the Annales School, the postulate of "total history" – a comprehensive view of history aiming to understand long-term structures instead of explaining the current state of affairs – is now well-established in Swiss historiography.[1] 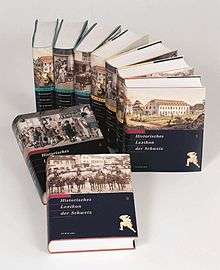 The first three volumes of the Historical Dictionary in each language.