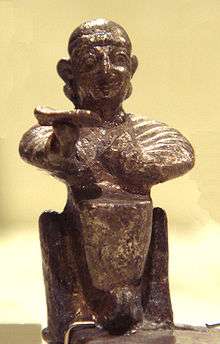 Hittite mythology and Hittite religion were the religious beliefs and practices of the Hittites, who created an empire centered in what is now Turkey from ca. 1,600 BC to 1,180 BC.

Most of the narratives embodying Hittite mythology are lost, and the elements that would give a balanced view of Hittite religion are lacking among the tablets recovered at the Hittite capital Hattusa and other Hittite sites. Thus, "there are no canonical scriptures, no theological disquisitions or discourses, no aids to private devotion".[1] Some religious documents formed part of the corpus with which young scribes were trained, and have survived, most of them dating from the last several decades before the final burning of the sites. The scribes in the royal administration, some of whose archives survive, were a bureaucracy, organizing and maintaining royal responsibilities in areas that would be considered part of religion today: temple organization, cultic administration, reports of diviners, make up the main body of surviving texts.[2]

The understanding of Hittite mythology depends on readings of surviving stone carvings, deciphering of the iconology represented in seal stones, interpreting ground plans of temples: additionally, there are a few images of deities, for the Hittites often worshipped their gods through Huwasi stones, which represented deities and were treated as sacred objects. Gods were often depicted standing on the backs of their respective beasts, or may have been identifiable in their animal form.[3]

Though drawing on ancient Mesopotamian religion, the religion of the Hittites and Luwians retains noticeable elements of reconstructed Proto-Indo-European religion. For example, Tarhunt, the god of thunder and his conflict with the serpent Illuyanka resembles the conflict between Indra and the cosmic serpent Vritra in Vedic mythology, or Thor and the serpent Jörmungandr in Norse mythology. His consort is the Hattic solar deity. This divine couple were presumably worshipped in the twin cellas of the largest temple at Hattusa.[4]

The liminal figure mediating between the intimately connected worlds of gods and mankind was the king and priest; in a ritual dating from the Hittite Old Kingdom period:

The city of Arinna, a day's march from Hattusa, was perhaps the major cult center of the Hittites, and certainly of their major sun goddess, known as dUTU URUArinna "sun goddess of Arinna".[6]

Deities and their myths 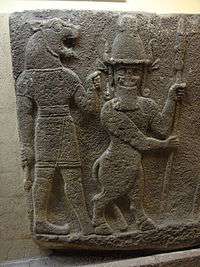 The Hittites referred to their own "thousand gods", of whom a staggering number appear in inscriptions but remain nothing more than names today.[7] This multiplicity has been ascribed to a Hittite resistance to syncretization: "many Hittite towns maintained individual storm-gods, declining to identify the local deities as manifestations of a single national figure," Gary Beckman observed.[4] The multiplicity is doubtless an artifact of a level of social-political localization within the Hittite "empire" not easily reconstructed. For example, the Bronze Age cult centre of Nerik,[8] to the north of the capitals Hattusa and Sapinuwa, the Hittites held as sacred to a local storm god who was the son of Wurusemu, sun goddess of Arinna: he was propitiated from Hattusa:

Because the men of Kaška have taken the land of Nerik for themselves, we are continually sending the rituals for the Storm God in Nerik and for the gods of Nerik from Ḫattuša in the city of Ḫakmišša, (namely) thick-breads, libations, oxen, and sheep.[9]

The weather god was identified there with Mount Zaliyanu near Nerik, responsible for assigning rain to the city's croplands.

Among the crowd a few stand out as more than local: Tarhun has a son, Telipinu and a daughter, Inara. Inara is a protective deity (dLAMMA) involved with the Puruli spring festival. Ishara is a goddess of the oath; lists of divine witnesses to treaties seem to represent the Hittite pantheon most clearly,[10] though some well-attested gods are inexplicably missing. 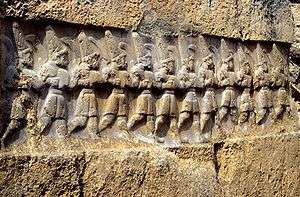 Relief from Yazılıkaya, a sanctuary at Hattusa, depicting twelve gods of the underworld.

In the 13th century some explicit gestures toward syncretism appear in inscriptions. Puduhepa, queen and a priestess, worked on organizing and rationalizing her people's religion.[11] In an inscription she invokes:

The Luwian god of weather and lightning, Pihassassa, may be at the origin of Greek Pegasus. Depictions of hybrid animals (like hippogriffs, chimerae etc.) are typical for the Anatolian art of the period. In the Telipinu myth, the disappearance of Telipinu, god of agriculture and fertility causes all fertility to fail, both plant and animal. This results in devastation and despair among gods and humans alike. In order to stop the havoc and devastation, the gods seek Telipinu but fail to find him. Only a bee sent by the goddess Hannahannah finds Telipinu, and stings him in order to wake him up. However this infuriates Telipinu further and he "diverts the flow of rivers and shatters the houses". In the end, the goddess Kamrusepa uses healing and magic to calm Telipinu after which he returns home and restores the vegetation and fertility. In other references it is a mortal priest who prays for all of Telipinu's anger to be sent to bronze containers in the underworld, of which nothing escapes.[14]