For the feast day, see Feast of the Holy Name of Jesus. For other uses, see Holy Name (disambiguation). 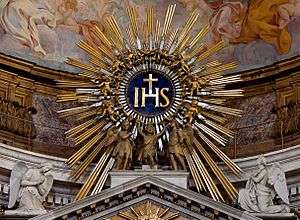 IHS monogram, with kneeling angels, atop the main altar, Church of the Gesù, Rome.

The veneration of Nomina sacra in the form of variants of the Christogram has a tradition going back to early Christianity.[2][3][4] and related practices of devotion exist in Eastern Christianity (c.f. Jesus Prayer).[5] The feast day is celebrated either as the Feast of the Holy Name of Jesus or as that of Circumcision of Jesus, in various Christian churches. 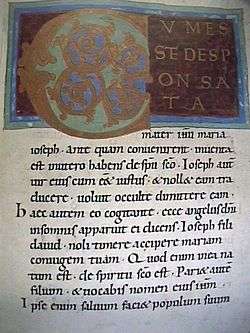 The Gospel of Matthew provides a specific meaning and intention for the name Jesus (as the one who "saves his people from sin") and indicates that it was selected by Heavenly guidance. For centuries, Christians have invoked the Holy Name, and have believed that there is intrinsic power in the name of Jesus.[3][6][7]

In Luke 1:31, an angel tells Mary to name her child Jesus, and in Matthew 1:21 an angel tells Joseph to name the child. Matthew places special emphasis on the origin of the names of Jesus, 1:21-23 discussing the two names Jesus and Emmanuel.[8][9] The significance is underscored by the fact that Matthew pays more attention to the name of the child and its theological implications than the actual birth event itself.[8][9]

In Matthew 1:21 the message of the angel in Joseph's first dream includes the origin of the name Jesus, and has salvific implications when the angel instructs Joseph: "you shall call his name Jesus, for he will save his people from their sins".[6][10] It is the only place in the New Testament where "saves his people" appears with "sins".[11]

Matthew 1:21 provides the beginnings of the Christology of the name Jesus. At once it achieves the two goals of affirming Jesus as the saviour and emphasizing that the name was not selected at random, but based on a Heavenly command.[12] The name Emmanuel (meaning God is with us) is also given to Jesus in Matthew 1:23 ("they shall call his name Emmanuel"). Emmanuel does not appear elsewhere in the New Testament, but in the context of Matthew 28:20 ("I am with you always, even unto the end of the world") indicates that Jesus will be with the faithful to the end of the age.[12]

Reverence for the Holy Name is emphasized by Saint Paul in Philippians 2:10 where he states: "That in the name of Jesus every knee should bow, of those that are in heaven, on earth, and under the earth".[13] In Romans 10:13 St. Paul reiterates the salvific nature of the Holy Name by stating that those who "call on the name of the Lord" will be saved.[14]

The power of the name Jesus used in petitions is stressed in John 16:23 when Jesus states: "If you ask the Father anything in my name he will give it you." Many Christian prayers thus conclude with the words: "Through Our Lord Jesus Christ".[13] Several episodes in the New Testament refer to the power of the invocation of the Holy Name. In Mark 9:38-39 demons are driven out by the power of the name Jesus, in Acts 2:38 baptisms take place and in Acts 3:6, Acts 4:7-11 and Acts 9:34 miracles are performed.[3] Many Christians believe that as in Acts 16:18 the invocation of the name of Jesus provides protection by repelling evil.[15]

The reverence and affection with which Christians have regarded the Holy Name of Jesus goes back to the earliest days of Christianity, as shown in Acts 4:10 and Philippians 2:10.[2]

If you think on the name Jesus continually and hold it stably, it purges your sin and kindles your heart
— Richard Rolle, 14th century.[16]

Devotion to and veneration of the IHS monogram, derived from the Greek word for Jesus, ΙΗΣΟΥΣ (and sometimes erroneously interpreted[13] as Iesus Hominum Salvator, Jesus saviour of mankind), also dates back to the early days of Christianity, where it was placed on altars and religious vestments, ornaments and other objects.[3] The IHS monogram is also found on a gold coin from the eighth century.[4]

Medieval devotions to the Holy Name in England were promoted by Anselm of Canterbury early in the 12th century.[17] In continental Europe, shortly after Anselm, the veneration of the Holy Name was strongly encouraged by Bernard of Clairvaux in his sermons and writings. Bernard's writings such as the Sermon on the Canticles later influenced others such as Richard Rolle who expressed similar views, e.g. that of the Holy Name acting as a "healing ointment" for the soul.[18][19]

The Jesuit logo has three nails (symbolizing the Crucifixion) below the IHS monogram with a cross.

A number of religious communities dedicated to the Holy Name Jesus have been formed since the Middle Ages.[20] In the 16th century, the Jesuits made the IHS monogram the emblem of their society, by adding a cross over the H and by showing three nails underneath it.[13] Official recognition for the Holy Name was provided by Pope Gregory X at the Council of Lyons in 1274.[17][21] In the 14th century, Henry Suso in Germany and Richard Rolle in England promoted devotions to the Name of Jesus.[16] Rolle believed that the name Jesus has awesome intrinsic power, in a manner reminiscent of the Old Testament reverence of the name Jehovah.[16] In Rolle's view the act of calling on the Holy Name purifies the soul and amounts to a reconstruction of the self as a contemplative.[22] Rolle composed a number of lyrics about the Holy Name.[16] 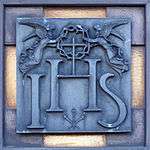 IHS with angels and a Crown of Thorns, in Hostýn, Czech Republic.

In the 15th century, the Franciscan Bernardine of Siena actively promoted the devotion to the Holy Name. At the end of his sermons he usually displayed the trigram IHS on a tablet in gold letters.[21] Bernardine would then ask the audience to "adore the Redeemer of mankind". Given that this practice had an unorthodox air, he was brought before Pope Martin V, who instead of rebuking Bernardine, encouraged the practice and joined a procession for it in Rome.[13] The devotion to the Holy Name became so popular in Italy that the IHS trigram was often inscribed over the doorways of houses.[24] The tablet used by Bernardine is now venerated at the basilica of Santa Maria in Aracoeli in Rome.[13]

Sacramentals such as the Little Sachet (associated with the Holy Name) are used by Roman Catholics. The Little Sachet bears the statement: "When Jesus was named — Satan was disarmed."[25]

John Calvin believed in reverence for the Holy Name and encouraged Christians to: "glorify His holy name with our whole life".[26] Martin Luther encouraged "pure faith and confidence, and a cheerful meditation of and calling upon His holy Name".[27]

O nomen Jesu by Peter Philips (1612) and Johann Rosenmüller (1648) are motets intended for the service commemorating the naming of Jesus. O Jesu, nomen dulce is a motet by Heinrich Schütz.

The Jesus prayer, which perhaps dates to the 4th century, is widely used in the Eastern Church. Devotions to the Holy Name continued also in the Eastern Church into the 19th and 20th centuries. St. Theophan the Recluse regarded the Jesus Prayer stronger than all other prayers by virtue of the power of the Holy Name and St. John of Kronstadt stated: "The Name of the Lord is the Lord Himself".[28] The doctrine of imiaslavie (имяславие, or onomatodoxy), the worship of the Name of God as identical with God Himself, was condemned by the Russian Orthodox Church in 1913.[29]