The Hospital for Sick Children

The Hospital for Sick Children, corporately branded as SickKids, is a children's hospital and teaching hospital located on University Avenue in Toronto, Ontario, Canada. It is affiliated with the University of Toronto Faculty of Medicine, and is the second-largest paediatric research hospital in the world, after the Boston Children's Hospital. The hospital's Peter Gilgan Centre for Research and Learning is the largest pediatric research building in the world at 750,000 square feet.[1] Founded in 1875, the hospital was inspired by the example of Great Ormond Street Hospital in London.

The hospital is located in the Discovery District of Downtown Toronto on University Avenue, adjacent to the Toronto General Hospital and across from Mount Sinai Hospital and the Princess Margaret Cancer Centre—collectively forming a complex known as Hospital Row, each connected by underground tunnels and bridges. The hospital is known for its advertisement campaigns and the largest amounts of donations received for any Canadian hopsital. 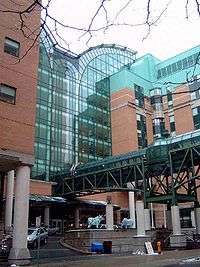 Atrium of the Hospital for Sick Children, designed by Eberhard Zeidler.

Medical treatments at the hospital are covered by publicly funded health insurance, as is the case in all Canadian hospitals. Philanthropy is a critical source of funding for SickKids Hospital that is separate and distinct from government and granting agencies. In 2006/07, financial support from SickKids Foundation to the hospital totalled $72.1 million. The support went towards infrastructure and support for physicians, researchers and scientists who compete for national and international research grants. Next to government, SickKids Foundation is the largest funding agency in child health research, education and care in Canada. The Foundation maintains a fund, called the Herbie Fund, for patients not covered by Canadian health insurance. The fund was established in 1979 to provide for the treatment of Herbie Quiñones, a seven-month-old patient from Brooklyn, New York. 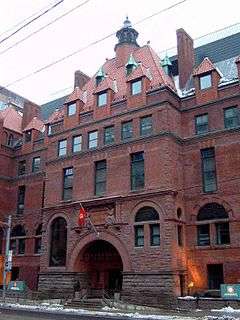 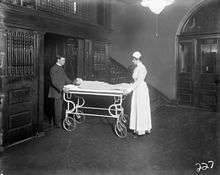 During the spring of 1875, an eleven-room house was rented for $320 a year by a Toronto women's bible study group led by Elizabeth McMaster.[2] They set up six iron cots and "declared open a hospital 'for the admission and treatment of all sick children.'" Their first patient, a scalding victim named Maggie, came in on April 3. Forty-four patients were admitted to the Hospital in its first year of operation and sixty-seven others were treated in outpatient clinics.[3]

In 1876 the hospital moved to larger facilities. In 1891 the hospital moved from rented premises to a building constructed for it at College and Elizabeth streets where it would remain for sixty years. This old building, known as the Victoria Hospital for Sick Children, is now the Toronto area headquarters of Canadian Blood Services. In 1951 the hospital moved to its present University Avenue location, on the grounds where Canadian-born movie star Mary Pickford's childhood home once stood.[3]

In 1972,[4] the hospital was equipped with a rooftop helipad (CNW8).[5] Today, it is one of two downtown Toronto hospitals with a helipad (the other being St. Michael's Hospital) and one of three in Toronto (the third being at Sunnybrook Hospital).

The hospital was an early leader in the fields of food safety and nutrition. In 1908 a pasteurization facility for milk was established at the hospital, the first in Toronto, and 30 years before milk pasteurization became mandatory.[6] Researchers at the hospital invented the infant cereal, Pablum. The research that led to the discovery of insulin took place nearby at the University of Toronto and was soon applied at the hospital. Doctor Frederick Banting, one of the researchers, had served his internship at SickKids Hospital and went on to become an attending physician there. In 1963 William Thornton Mustard developed the Mustard surgical procedure used to help correct heart problems in blue baby syndrome.[6] In 1989, a team of researchers at the hospital discovered the gene responsible for cystic fibrosis.[7]