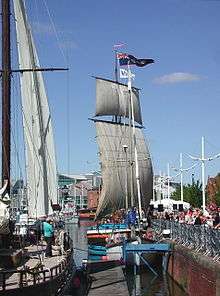 The Humber Keel was a type of sail craft used for inshore and inland cargo transport around Hull and the Humber Estuary, in the United Kingdom, particularly through the late 19th and early 20th centuries.

The ship is a descendant of the Saxon ship of the fifth century AD. The term "keel" is derived from the Anglo-Saxon word "ceol", which referred to a ship built using a longitudinal strengthending beam (keel) together with a single mast and square rigging.[1] The remains of keels from the 13th century have been excavated, and the keel is identified as a specific class of ship in the Tudor records kept by the Corporation of York.[2] Early keels were designed to work in waterways which were only 3.5 feet (1.1 m) deep, but could still carry 40 to 50 tonnes of cargo.[3] Such boats were clinker-built, meaning that the planks overlapped one another, but this gradually gave way to carvel construction, where the planks join edge to edge. First the bottom of the hull was carvel-built, with the sides still clinker-built, and then the whole boat used the newer method.[4]

Keels were constructed to a variety of sizes, between 57 and 68 feet (17 and 21 m) long and between 14.5 and 16.5 feet (4.4 and 5.0 m) wide. They had strongly built hulls with a bluff bow, were steered by a tiller, and were designed to work in shallow waters, so that they could be used on the inland waterways connected to the Humber. By the 19th century, most of the hulls were built of oak, and the design was later copied by steel replacements. In the 20th century, steam and diesel engines replaced sail, with grants available to convert sailing vessels to mechanical power before the Second World War.[2] All of the sailing keels had gone by 1949, but one has been preserved and returned to sail by the Humber Keel and Sloop Preservation Society.[3]

One advantage of the design was the ability to sail very close to the wind, which was essential on the narrow waterways on which they plied. They were also very manoeuvrable, and a single person could handle one on narrow and quiet waters.[3] Stability was aided by a huge pair of leeboards, since the vessels did not have a central keel, and the small topsail was used when they were navigating the canals and rivers, but not usually when they were on the Humber estuary.[5]

The dimensions of these craft were influenced by the gauge, or width, of inland waterways created or modernised during that period. In comparison to the widespread use of the Narrowboat standard, far fewer inland waterways were designed to accommodate the larger Humber Keel gauge vessels. This standard is still used on associated waterways today.