The Hummer H3 is a sport utility vehicle/off-road vehicle from Hummer that was produced from 2005 to 2010. Introduced for the 2006 model year, it was based on a highly modified GMT355 underpinning the Chevrolet Colorado and GMC Canyon compact pickup trucks that were also built at GM's Shreveport Operations in Shreveport, Louisiana and the Port Elizabeth plant in South Africa. The H3 was the smallest among the Hummer models, and the only one to be built by General Motors. It was available either as a traditional midsize SUV or as a midsize pickup known as the H3T. 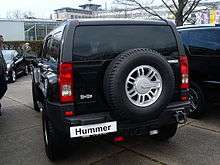 The H3 featured a two-speed, electronically controlled full-time four-wheel drive system that made it for both on-road and off-road driving. Electronic locking front and rear differentials were optional. Like the Hummer H2, the H3 can ford 27 inches (690 mm) of water (tested in depths up to 34 in or 864 mm) at a speed of 5 mph (8.0 km/h) and 20 in (508 mm) of water at a speed of 20 mph (32 km/h). Standard ground clearance with the 31 inch tires measured at 9.7 in (246 mm) while the approach, departure, and breakover angles are measured at 37.4°, 34.7°, and 22.1° respectively, allowing the H3 to scale a 16-inch (406 mm) vertical wall and negotiate grades of 60% and side slopes of 40%. Front and rear recovery hooks were standard, with an optional trailer hitch and wiring harness. The optional Adventure or Off Road package included 33 inch tires which increased its capabilities.

Electronic stability control, anti-lock four-wheel disc brakes, brake-controlled traction control, LATCH child-seat anchors, and tire-pressure monitoring were standard features on the H3. Side-curtain airbags were optional until 2008 when they were made standard across. The H3 was rated Acceptable, the second highest rating, by the Insurance Institute for Highway Safety in both frontal offset and side-impact crashes (with side airbags) and Poor, the lowest rating, for rear-crash protection/head restraints.[3]

The vehicle was originally developed as a regular cab (two-door) concept pickup truck in 2003, that was shown at the 2004 Los Angeles Auto Show.[5] The five-passenger four-door crew-cab production version appeared at the 2008 Chicago Auto Show.[6] The H3T featured a 5-foot bed with built-in storage boxes and came in standard H3T, H3T Adventure, H3T Luxury, and H3T Alpha (with cloth or leather trim) trim packages.

A road test by Motor Trend reported the 2009 truck "crawled up rock steps, ran through sand washes, and navigated steep ledges with confidence and capability to spare." They described its turning radius "uncomfortably wide" and said "at highway cruising it would've been nice to have a faster, firmer feel.[7]

In 2007, GM South Africa launched Hummer production in Port Elizabeth. The plant manufactured the Hummer H3 for the South African market, as well as units exported to Asia and Europe. This factory also manufactured a right hand drive version for the Australian market between 2007 and 2009.[11] In Australia, the Hummer was distributed by GM Holden by specialist dealerships that were also affiliated with the Saab automobile brand, which was owned by GM at that time.

In early 2009, Raser Technologies and FEV built a prototype plug-in hybrid H3 that could achieve up to 100 MPG given enough main power.[14] This vehicle was renamed the Electric Hummer H3, and later showcased by California State Governor Arnold Schwarzenegger at a press conference at the State Capitol in Sacramento as part of a campaign to promote greener vehicles.[15]

At the end of February 2010, General Motors announced it would begin dismantling the Hummer brand.[16] After filling a rental-car fleet order, the last Hummer H3T rolled off line at Shreveport on May 24, 2010.[17]