National Institute of Statistics and Census of Argentina 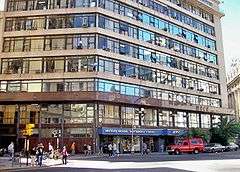 National Statistics and Censuses Institute (Spanish: Instituto Nacional de Estadística y Censos, INDEC) is the Argentine government agency responsible for the collection and processing of statistical data. The institute also analyses economic and social indicators such as inflation rate, consumer price index and unemployment, among others.

The INDEC is supervised by different federal agencies, and is under the direct oversight of the Secretaría de Programación Económica y Regional (Secretariat of Economic and Regional Planning) of the Ministerio de Economía y Producción (Ministry of Economy and Production, MECON).

The INDEC coordinates the Sistema Estadístico Nacional (National Statistics' System, SEN) through which the national, provincial and local statistical services work together. Each provincial government has a statistics bureau called Dirección de Estadística, that collects and processes information.

Demographic and economic information is permanently updated with off-year censuses, such as the Economic and Agricultural Censuses, and the sampled surveys published in Encuesta Permanente de Hogares (Permanent Survey of Households); which are delivered every 6 months. Monthly releases include figures on inflation, employment, trade balances, industrial production, construction, retail sales, and GDP.

The first national statistics' centre was the Dirección General de Estadística (General Directorate of Statistics), established in 1894 as a division of the Ministry of Public Finances. Fifty years later, in 1944, the Consejo Nacional de Estadística y Censos (National Council of Statistics and Censuses) was created, with dependencies on both the Ministry of the Interior and the National Presidential Office. Other agencies were later formed in 1950, 1952, and 1956 before the final creation of the Instituto Nacional de Estadística y Censos in 1968 by Law 17622 and Decrees 3110/70 and 1831/93.

The bureau's headquarters are located in a downtown, rationalist building designed by Arturo Dubourg, commissioned by President Juan Perón for use as the Ministry of Labour, and completed in 1956. 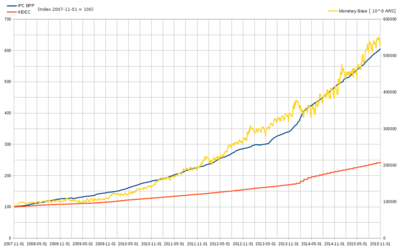 Although nominally independent, INDEC is subject to strong political pressure from the government, and its statistics are no longer considered trustworthy.[2][3][4][5][6] Because INDEC's statistics have been reported as being manipulated by the Kirchner government, it is considered "discredited".[7]

Controversy arose when the government of President Néstor Kirchner replaced Graciela Bevacqua, the Consumer Prices Indicator director (Índice de Precios al Consumidor - IPC). Bevacqua is reported to have arrived at a consumer price increase figure of almost 2.0% for January 2007 from internal data but the rate officially reported to the public was 1.1%.[8]

The head of INDEC resigned in March,[9] and a new board of directors led by Ana María Edwin was installed by the Ministry of Economy; the board would operate under the supervision of Commerce Secretary Guillermo Moreno.[10] A group of employees protested publicly[11][12] at what they saw as a violation of INDEC's autonomy, and an attempt by the Economy Ministry under Felisa Miceli to illegally keep inflation indicators under one percent a month.[13] Prosecutors gathered evidence that high government officials had inquired repeatedly of statistical staff how to get lower inflation numbers, and that in early 2007 managers of the price indexes had excluded products whose prices had risen more than 15% in the survey and changed price data after it came in from the field workers.[14]

Prices and the official record have continued to part ways since former Commerce Secretary Guillermo Moreno's decision to intervene in the statistics institute in 2007. Private-sector economists and statistical offices of provincial governments show inflation two to three times higher than INDEC's number (which only covers Greater Buenos Aires). Unions, including those from the public sector, use these independent estimates when negotiating pay rises. Surveys by Torcuato di Tella University show inflation expectations running at 25-30%.[15]

Since then, INDEC's headline inflation statistics have been substantially lower than estimates from analysts in the private sector and also lower than INDEC's implicit private consumption price index which is incorporated in the measurement of real GDP. Taken from the first quarter of 2007, each index (from the same quarter the year before) has read as follows:

The discrepancy has led to exchanged accusations of politically motivated statistical legerdemain between the ruling party and most of the political opposition, on both left and right. Officials facing election have an incentive to understate the headline CPI figure. Opposition figures frequently relied on estimates made by figures such as Orlando Ferreres (a former Bunge y Born agribusiness executive and Economic Planning Secretary for a leading opponent, former President Carlos Menem).[18]

The practice yielded the ruling party no political benefit, and helped contribute to their loss in the October 2009 mid-term elections. An alternative explanation for the policy could rest on government finances: the national government has issued around US$100 billion in government bonds. Payments on almost US$50 billion of this are indexed to inflation.[19] Other government bonds are tied in value to GDP growth. A 7-point underestimate in inflation could save the Central Bank of Argentina US$3 billion in inflation-indexed interest payments, while higher economic growth would cost added interest on bonds tied to GDP; hence, there is a short-run financial benefit to the government from a discrepancy between the two inflation readings in the table.[20]

Since 2007, when Guillermo Moreno, the secretary of internal trade, was sent into the statistics institute, INDEC, to tell its staff that their figures had better not show inflation shooting up, prices and the official record have parted ways. Private-sector economists and statistical offices of provincial governments show inflation two to three times higher than INDEC's number (which only covers greater Buenos Aires). Unions, including those from the public sector, use these independent estimates when negotiating pay rises. Surveys by Torcuato di Tella University show inflation expectations running at 25-30%
— The Economist[21]