Ice pellets are a form of precipitation consisting of small, translucent balls of ice. Ice pellets are smaller than hailstones[1] which form in thunderstorms rather than in winter, and are different from graupel ("soft hail") which is made of frosty white rime, and from a mixture of rain and snow which is a slushy liquid or semisolid. Ice pellets often bounce when they hit the ground or other solid objects, and make a higher-pitched "tap" when striking objects like jackets, windshields, and dried leaves, compared to the dull splat of liquid raindrops. Pellets generally do not freeze into a solid mass unless mixed with freezing rain. The METAR code for ice pellets is PL (PE before November 1998[2]).

Ice pellets are known to Americans as sleet, the official term used by the U.S. National Weather Service.[3] However, the term sleet refers to a mixture of rain and snow in most Commonwealth countries,[4] including Canada.[5] Because of this, Environment Canada never uses the term sleet, and uses the terms "ice pellets" or "wet snow" instead.[6] 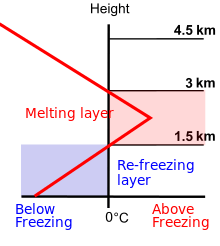 Ice pellets form when a layer of above-freezing air is located between 1,500 and 3,000 meters (5,000 and 10,000 ft) above the ground, with sub-freezing air both above and below it. This causes the partial or complete melting of any snowflakes falling through the warm layer (the French term for sleet, neige fondue, literally means "melted snow" because of this). As they fall back into the sub-freezing layer closer to the surface, they re-freeze into ice pellets. However, if the sub-freezing layer beneath the warm layer is too small, the precipitation will not have time to re-freeze before hitting the surface, so it will become freezing rain. A temperature profile showing a warm layer above the ground is most likely to be found in advance of a warm front during the cold season,[7] but can occasionally be found behind a passing cold front, and often with a stationary front. 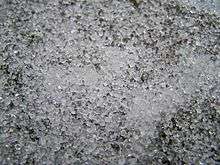 An accumulation of ice pellets 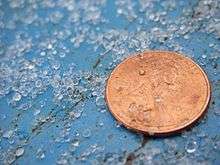 Ice pellets next to a U.S. penny for scale