An ice pop is a water-based frozen snack. It is also referred to as a popsicle (Canada, U.S., New Zealand), freezer pop (Ireland, U.S.), ice lolly (United Kingdom, Ireland, South Africa), ice block (New Zealand), icy pole (parts of Australia), or chihiro (Cayman Islands).[1] It is made by freezing flavored liquid (such as fruit juice) around a stick, generally resembling a tongue depressor. Often, the juice is colored artificially.[2] Once the liquid freezes solid, the stick can be used as a handle to hold the ice pop. When an ice pop does not have a stick, it is called, among other names, a freezie.

Frank Epperson of Oakland, California, popularized ice pops after patenting the concept of "frozen ice on a stick" in 1923.[3] He initially called it the Epsicle.[4] A couple of years later, Epperson sold the rights to the invention and the Popsicle brand to the Joe Lowe Company in New York City.[3]

Epperson claimed to have first created an ice pop in 1905 at the age of 11 when he accidentally left a glass of powdered soda and water with a mixing stick in it on his porch during a cold night, a story still printed on the back panel of Popsicle brand treat boxes. 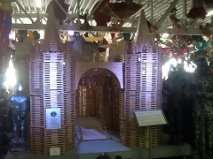 In the United States and Canada frozen ice on a stick is generically referred to as a popsicle due to the early popularity of the Popsicle brand, and the word has become a genericized trademark to mean any ice pop or freezer pop, regardless of brand or format. (The word is a portmanteau of pop and icicle.) They are also called an ice pop or freezer pop in the United States. In the Caicos Islands it is referred to as an ice saver. In the United Kingdom and Ireland the terms ice lolly and ice pop are used. Chihiro is used as a slang term in the Cayman Islands, partially derived from chill.[1] Ice block or icy pole are used in parts of Australia[5] and New Zealand.

An alternative to the store-bought ice pops is making them at home using fruit juice, drinks, or any freezable beverage. A classic method involves using ice cube trays and toothpicks, although various ice pop freezer molds are also available.

On June 22, 2005, Snapple tried to beat the existing Guinness World Records entry of a 1997 Dutch 21-foot (6.4 m) ice pop by attempting to erect a 25-foot (7.6 m) ice pop in New York City. The 17.5 short tons (15.9 t) of frozen juice that had been brought from Edison, New Jersey in a freezer truck melted faster than expected, dashing hopes of a new record. Spectators fled to higher ground as firefighters hosed away the melted juice.[6]