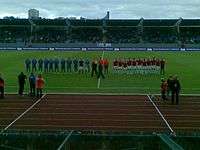 A friendly match between Iceland and Slovakia, at the Laugardalsvöllur in Reykjavík, Iceland

The Iceland men's national football team (Icelandic: Íslenska karlalandsliðið í knattspyrnu) is the national men's football team of Iceland and is controlled by the Football Association of Iceland.[4]

Although Iceland is one of Europe's smaller football nations, the football team has enjoyed success in the twenty first century. In the qualifying rounds for the 2014 FIFA World Cup, Iceland reached the play offs before losing to Croatia. Iceland reached its first major tournament, UEFA Euro 2016, after a qualification campaign which included home and away wins over the Netherlands.

In doing this they became the smallest ever nation to qualify for a major tournament. Iceland was allocated to Euro 2016 Group F. Birkir Bjarnason scored Iceland's first major tournament goal in the 50th minute against Portugal in a group stage match.[5]

Although Úrvalsdeild, the Icelandic Football League, was founded in 1912,[6] the country's first international match was only played on 29 July 1930, against the Faroe Islands.[7] Iceland won away, 1–0. However, both teams remained unaffiliated with FIFA. The first match officially recognised by FIFA took place in Reykjavík on 27 July 1946; Iceland lost 0–3 to Denmark.[8] The first international victory was against Finland in 1947.[9] For the first twenty years of the Football Association of Iceland (KSÍ)'s existence, the team did not participate in qualifying for the World Cup or the European Football Championship. In 1954 Iceland applied to take part in qualification for the 1956 European Football Championship, but the application was rejected.[7] In qualification for the 1958 World Cup, Iceland came last in their group, with no wins, and with 26 goals against.[7] Since 1974, the team has taken part inempted to qualifying for every World Cup and European Championship, but until recently without success. In 1994, the team was awarded their then best ever position in the FIFA rankings, 37th.[10]

In qualification for Euro 2004, Iceland finished third of their group, 1 point behind Scotland.[11] If they had finished second, they would have made a playoff spot.[12]

In 2014, Iceland almost became the smallest nation to qualify for a FIFA World Cup.[13] Finishing second in Group D, they played Croatia in a two-leg playoff for qualification.[14][15] After holding them to a 0–0 draw in the home leg, they lost 2–0 away.[16]

Iceland qualified for a major tournament for the first time in 2015 after finishing second in Group A of qualification for Euro 2016, losing only two games, and beating the Netherlands, who had finished third in the 2014 World Cup, twice.[17] During the qualification, they reached their highest ranking in the FIFA World Rankings, 23rd.[18][19] They were drawn into a group with Portugal, Hungary, and Austria for the final tournament.

At the Euro 2016, Iceland recorded 1–1 draws in their first two pool matches against Portugal and Hungary. They then advanced from their pool with a 2–1 victory against Austria.[20] Iceland qualified for the tournament's quarter finals, after a surprising 2–1 win against England in the Round of 16.[21] They were eliminated by France in the quarter-finals, by 5–2.[22]

All–time record against all nations

This list is Icelandic national team complete records, both friendlies and competitive matches. Countries that are in italics are not members of FIFA or are former countries. As of 15 November 2016

Rest of the World

Croatia on 12 November 2016 and the friendly match against

The following players have been called up to the Iceland squad in the last 12 months.

The official kit is currently produced by Italian sports manufacturing company Erreà since 2002. Before that the kit providers were German companies Adidas (1947–1992) and Reusch (1993–2001).

Most caps and goals

Note: Some unofficial matches are counted for some players playing pre-1990, as per the KSÍ count. 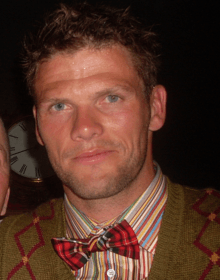 Hermann Hreiðarsson played 89 games for Iceland between 1996 and 2011, which puts him second in the nation's appearances list.

In bold players still playing or available for selection.

Note: Some unofficial matches are counted for some players playing pre-1990, as per the KSÍ count.

Eiður Smári Guðjohnsen has scored a record 26 goals for Iceland since 1996.

In bold players still playing or available for selection.

In a friendly against Estonia on 24 April 1996 in Tallinn, Eiður Smári Guðjohnsen entered as a substitute for his father Arnór. This marked the first time that a father and son played in the same international match.