Il Sole 24 Ore has its headquarters in Milan[6] and is published in broadsheet format.[7] The paper reports on business, politics, developments in commercial and labour law, corporate news and features. Extensive share and financial product listings are provided in its daily supplement, Finanza e Mercati.

Irregular supplements are also produced with a focus on a specific issue such as a particular business sector. 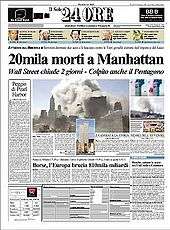 The printed newspaper is presented as part of an integrated information system which includes: