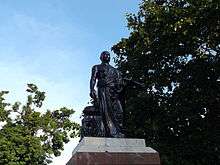 Ilango Adigal was a Chera prince from the 2nd century AD/CE, who is the author of Silappatikaram, one of the five great epics of Tamil literature.[1] Ilango was the brother of Kodungallur - or Muziris-based Chera king Cheran Chenguttuvan or Cheralathana Chenguttavan. According to a legend, an astrologer predicted that he would become the ruler of the land and to obviate such a happening, especially when his elder brother the rightful heir was alive, the prince became a monk taking the name of Ilango Adigal.[2][3] There are also claims that Ilango Adigal was a contemporary of Sattanar, the author of Manimekalai.[4]

Ilango Adigal was a Jain prince of the third century CE.[5]