"Royal purple" redirects here. For other uses, see Royal Purple (disambiguation).
Not to be confused with byzantium (color), a modern colour. 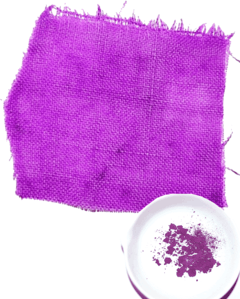 A small amount of dibromindigo as a powder, and its effect on a piece of fabric 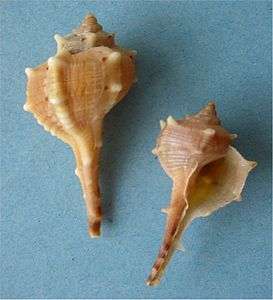 The chemical structure of 6,6′-dibromoindigo, the main component of Tyrian purple

A space-filling model of 6,6′-dibromoindigo, based on the crystal structure

Tyrian purple may first have been used by the ancient Phoenicians as early as 1570 BC.[2] The dye was greatly prized in antiquity because the colour did not easily fade, but instead became brighter with weathering and sunlight. Its significance is such that the name Phoenicia means 'land of purple.'[3][4] It came in various shades, the most prized being that of "blackish clotted blood".[5]

Tyrian purple was expensive: the 4th-century-BC historian Theopompus reported, "Purple for dyes fetched its weight in silver at Colophon" in Asia Minor.[6] The expense meant that purple-dyed textiles became status symbols, and early sumptuary laws restricted their uses. The production of Tyrian purple was tightly controlled in Byzantium and was subsidized by the imperial court, which restricted its use for the colouring of imperial silks.[7] Later (9th century)[8] a child born to a reigning emperor was said to be porphyrogenitos, "born in the purple".

The dye substance is a mucous secretion from the hypobranchial gland of one of several species of medium-sized predatory sea snails that are found in the eastern Mediterranean Sea. These are the marine gastropods Bolinus brandaris the spiny dyemurex, (originally known as Murex brandaris (Linnaeus, 1758)), the banded dye-murex Hexaplex trunculus, the rock-shell Stramonita haemastoma,[10][11] and less commonly a number of other species such as Bolinus cornutus. The dye is an organic compound of bromine (i.e., an organobromine compound), a class of compounds often found in algae and in some other sea life, but much more rarely found in the biology of land animals.

In nature the snails use the secretion as part of their predatory behaviour in order to sedate prey and as an antimicrobial lining on egg masses.[12][13] The snail also secretes this substance when it is attacked by predators, or physically antagonized by humans (e.g., poked). Therefore, the dye can be collected either by "milking" the snails, which is more labour-intensive but is a renewable resource, or by collecting and destructively crushing the snails. David Jacoby remarks that "twelve thousand snails of Murex brandaris yield no more than 1.4 g of pure dye, enough to colour only the trim of a single garment."[14]

Many other species worldwide within the family Muricidae, for example Plicopurpura pansa,[15] from the tropical eastern Pacific, and Plicopurpura patula[16] from the Caribbean zone of the western Atlantic, can also produce a similar substance (which turns into an enduring purple dye when exposed to sunlight) and this ability has sometimes also been historically exploited by local inhabitants in the areas where these snails occur. (Some other predatory gastropods, such as some wentletraps in the family Epitoniidae, seem to also produce a similar substance, although this has not been studied or exploited commercially.) The dog whelk Nucella lapillus, from the North Atlantic, can also be used to produce red-purple and violet dyes.[17]

The Phoenicians also made an indigo dye, sometimes referred to as royal blue or hyacinth purple, which was made from a closely related species of marine snail.[18]

This second species of dye murex is found today on the Mediterranean and Atlantic coasts of Europe and Africa (Spain and Portugal, Morocco, and the Canary Islands).[11] 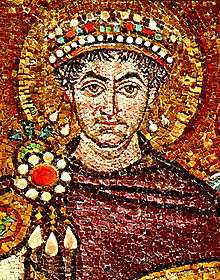 The colour-fast (non-fading) dye was an item of luxury trade, prized by Romans, who used it to colour ceremonial robes. Used as a dye, the colour shifts from blue (peak absorption at 590 nm, which is yellow-orange) to reddish-purple (peak absorption at 520 nm, which is green).[21] It is believed that the intensity of the purple hue improved rather than faded as the dyed cloth aged. Vitruvius mentions the production of Tyrian purple from shellfish.[22] In his History of Animals, Aristotle described the shellfish from which Tyrian purple was obtained and the process of extracting the tissue that produced the dye.[23] Pliny the Elder described the production of Tyrian purple in his Natural History:[24][25]

The most favourable season for taking these [shellfish] is after the rising of the Dog-star, or else before spring; for when they have once discharged their waxy secretion, their juices have no consistency: this, however, is a fact unknown in the dyers' workshops, although it is a point of primary importance. After it is taken, the vein [i.e. hypobranchial gland] is extracted, which we have previously spoken of, to which it is requisite to add salt, a sextarius [about 20 fl. oz.] about to every hundred pounds of juice. It is sufficient to leave them to steep for a period of three days, and no more, for the fresher they are, the greater virtue there is in the liquor. It is then set to boil in vessels of tin [or lead], and every hundred amphoræ ought to be boiled down to five hundred pounds of dye, by the application of a moderate heat; for which purpose the vessel is placed at the end of a long funnel, which communicates with the furnace; while thus boiling, the liquor is skimmed from time to time, and with it the flesh, which necessarily adheres to the veins. About the tenth day, generally, the whole contents of the cauldron are in a liquefied state, upon which a fleece, from which the grease has been cleansed, is plunged into it by way of making trial; but until such time as the colour is found to satisfy the wishes of those preparing it, the liquor is still kept on the boil. The tint that inclines to red is looked upon as inferior to that which is of a blackish hue. The wool is left to lie in soak for five hours, and then, after carding it, it is thrown in again, until it has fully imbibed the colour.

Archaeological data from Tyre indicate that the snails were collected in large vats and left to decompose. This produced a hideous stench that was actually mentioned by ancient authors. Not much is known about the subsequent steps, and the actual ancient method for mass-producing the two murex dyes has not yet been successfully reconstructed; this special "blackish clotted blood" colour, which was prized above all others, is believed to be achieved by double-dipping the cloth, once in the indigo dye of H. trunculus and once in the purple-red dye of B. brandaris.[5][18]

The Roman mythographer Julius Pollux, writing in the 2nd century AD, asserted (Onomasticon I, 45–49) that the purple dye was first discovered by Heracles, or rather, by his dog, whose mouth was stained purple from chewing on snails along the coast of the Levant. Recently, the archaeological discovery of substantial numbers of Murex shells on Crete suggests that the Minoans may have pioneered the extraction of Imperial purple centuries before the Tyrians. Dating from collocated pottery suggests the dye may have been produced during the Middle Minoan period in the 20th–18th century BC.[26] Accumulations of crushed murex shells from a hut at the site of Coppa Nevigata in southern Italy may indicate production of purple dye there from at least the 18th century BC.[27]

The production of Murex purple for the Byzantine court came to an abrupt end with the sack of Constantinople in 1204, the critical episode of the Fourth Crusade. David Jacoby concludes that "no Byzantine emperor nor any Latin ruler in former Byzantine territories could muster the financial resources required for the pursuit of murex purple production. On the other hand, murex fishing and dyeing with genuine purple are attested for Egypt in the tenth to 13th centuries."[28] By contrast, Jacoby finds that there are no mentions of purple fishing or dyeing, nor trade in the colorant in any Western source, even in the Frankish Levant. The European West turned instead to vermilion provided by the insect Kermes vermilio, known as grana, or crimson.

In 1909, Harvard anthropologist Zelia Nuttall compiled an intensive comparative study on the historical production of the purple dye produced from the carnivorous murex snail, source of the royal purple dye valued higher than gold in the ancient Near East and ancient Mexico. Not only did the people of ancient Mexico use the same methods of production as the Phoenicians, they also valued murex-dyed cloth above all others, as it appeared in codices as the attire of nobility. "Nuttall noted that the Mexican murex-dyed cloth bore a "disagreeable... strong fishy smell, which appears to be as lasting as the color itself.[29] Likewise, the ancient Egyptian Papyrus of Anastasi laments: "The hands of the dyer reek like rotting fish..."[30] So pervasive was this stench that the Talmud specifically granted women the right to divorce any husband who became a dyer after marrying".[31]

Murex purple was a very important industry in many Phoenician colonies and Carthage was no exception. Traces of this once very lucrative industry are still visible in many Punic sites such as Kerkouane, Zouchis, Meninx and even in Carthage itself. According to Pliny, Meninx (today's Djerba) produced the best purple in Africa which was also ranked second only after Tyre's. 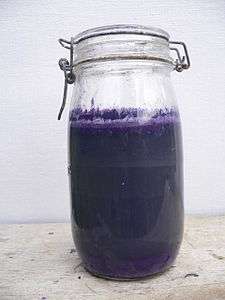 The main chemical constituent of the Tyrian dye was discovered by Paul Friedländer in 1909 to be 6,6′-dibromoindigo, a substance that had previously been synthesized in 1903. The dye was thus shown to be an organobromine compound.[32][33] However, it has never been synthesized commercially.[34][35]

In 1998, through a lengthy trial and error process, an English engineer named John Edmonds rediscovered a process for dyeing with Tyrian purple.[36][37] He researched recipes and observations of dyers from the 15th century to the 18th century. He explored the biotechnology process behind woad fermentation. After collaborating with a chemist, Edmonds hypothesized that an alkaline fermenting vat was necessary. He studied an incomplete ancient recipe for Tyrian purple recorded by Pliny the Elder. By altering the percentage of sea salt in the dye vat and adding potash, he was able to successfully dye wool a deep purple colour.[38]

Recent research in organic electronics has shown that Tyrian purple is an ambipolar organic semiconductor. Transistors and circuits based on this material can be produced from sublimed thin-films of the dye. The good semiconducting properties of the dye originate from strong intermolecular hydrogen bonding that reinforces pi stacking necessary for transport.[39]

True Tyrian purple, like most high-chroma pigments, cannot be accurately displayed on a computer display. Ancient reports are also not entirely consistent, but these swatches give an indication of the likely range in which it appeared:

This is the sRGB colour #990024, intended for viewing on an output device with a gamma of 2.2. It is a representation of RHS colour code 66A,[40] which has been equated to "Tyrian red",[41] a term which is often used as a synonym for Tyrian purple.

The colour name "Tyrian plum" is popularly given to a British postage stamp that was prepared, but never released to the public, shortly before the death of King Edward VII in 1910.