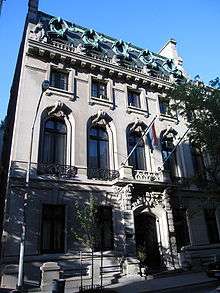 New India House, the home of the Indian Consulate-General in New York, on East 64th Street, in the Upper East Side Historic District of Manhattan

It was after the Luce–Celler Act of 1946 that Indian Americans were restored naturalization rights in the United States.[9] A number of Indian Americans came to the U.S. via Indian communities in other countries, including the United Kingdom, Canada, South Africa, Mauritius, Malaysia, Singapore, Suriname, Guyana, Fiji, Kenya, Tanzania, Uganda, Trinidad & Tobago, and Jamaica. The quota on Indian immigration was removed in the 1960s, leading to exponential growth in the number of Indian immigrants to the United States.[10] While Indians prior to this time were primarily involved in agricultural endeavors or constructing railroads in the western United States,[10] the largest number hereafter came to New York City and its affluent suburban environs, consisting largely of professionals, including physicians, engineers, financiers, scientists, entrepreneurs, and lawyers, as well as businesspeople.[10] 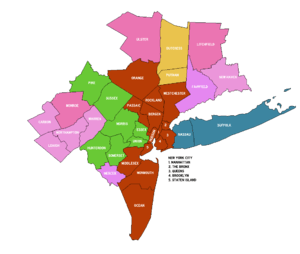 The New York-Newark-Bridgeport, NY-NJ-CT-PA Combined Statistical Area, consisting of New York City, Long Island, and adjacent areas within New York State, as well as nearby areas within the states of New Jersey (extending to Trenton), Connecticut (extending to Bridgeport), and including Pike County, Pennsylvania, was home to an estimated 659,784 Indian Americans as of the 2013 American Community Survey by the U.S. Census Bureau,[7] comprising by far the largest Indian American population of any metropolitan area in the United States;[11] New York City itself also contains by far the highest Indian American population of any individual city in North America, at approximately 207,000.[12] As of September 2016, Indian airline carrier Air India as well as United States airline carrier United Airlines were offering direct flights from the New York City Metropolitan Area to and from India. Air India's non-stop flights between Mumbai and Newark Liberty International Airport and between Delhi and JFK International Airport have been operational since the early 2000s; in August 2016, Air India commenced direct, one-seat flight service between Ahmedabad and Newark, via London Heathrow International Airport.[13] United Airlines operates non-stop flight service both between Delhi and Newark and between Mumbai and Newark.[14] At least twenty four Indian American enclaves characterized as a Little India have emerged in the New York City metropolitan area.

The Indian American population in the New York City metropolitan region was second in its population as an Asian ethnicity only to the approximately 779,269 Chinese Americans in the New York City area as of 2014.[7] However, while the presence and growth of the Chinese population is focused on New York City and Long Island in New York State, the gravitas of the Indian population is roughly evenly split between New Jersey and New York State.[15][16] Smaller populations of Asian Indians reside in the Connecticut and Pennsylvania portions of the New York City metropolitan region. Jersey City in New Jersey has the highest proportion of Asian Indians of any major U.S. city, comprising 10.9% of the overall population of Jersey City in 2010,[17] increasing to 11.4% by 2013.[18] Bergen County, New Jersey and Rockland County, New York are home to the highest concentrations of Malayalis outside of India.[19] Monroe Township, Middlesex County, in Central New Jersey, has displayed one of the fastest growth rates of its Indian population in the Western Hemisphere, increasing from 256 (0.9%) as of the 2000 Census[20] to an estimated 3,617 (8.8%) as of 2014,[21] representing a 1,312.9% numerical increase over that period, including many affluent professionals.

As the city proper with the largest Asian Indian population in the United States by a wide margin, with an estimated 227,994 individuals as of the 2014 American Community Survey,[28] and as the primary destination for new Indian immigrants,[29] New York City is subdivided into official municipal boroughs, which themselves are home to significant Asian Indian and other South Asian populations. Note that this list includes neither the large Desi populations of Pakistani Americans, Bangladeshi Americans, and Sri Lankan Americans, nor Indo-Caribbean Americans, Afghan Americans, and others of South Asian origin who make their home in New York City.

Medium and small-sized cities, as of 2012 American Community Survey[31] 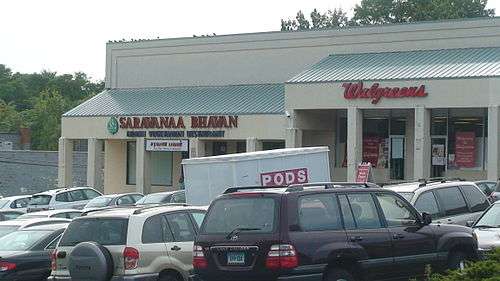 One of the most popular overseas branches of Saravanaa Bhavan, the world's largest Indian vegetarian restaurant chain, is located in Edison, Middlesex County, New Jersey.

India Square, also known as Little India or Little Bombay,[1] home to the highest concentration of Asian Indians in the Western Hemisphere,[2] is a rapidly growing Indian American ethnic enclave in Jersey City. The neighborhood is centered on Newark Avenue, between Tonnele Avenue and JFK Boulevard, and is considered to be part of the larger Journal Square District. This area has been home to the largest outdoor Navratri festivities in New Jersey as well as several Hindu temples.[38] This portion of Newark Avenue is lined with groceries,[39] electronics vendors, video stores, import/export businesses, clothing stores, and restaurants, and is one of the busier pedestrian areas of this part of the city, often stopping traffic for hours. According to the 2000 census, there were nearly 13,000 Indians living in this two-block stretch of Jersey City, up from 3,000 in 1980, increasing commensurately between 2000 and 2010.[40] An annual, colour-filled spring Holi festival has taken place in Jersey City since 1992, centered upon India Square and attracting significant participation and international media attention.[41][42] Although India Square continues to represent the heart of Little India in Jersey City, situated between Tonnele Avenue and John F. Kennedy Boulevard, Little India itself as of 2016 has been expanding further eastward along Newark Avenue, through Jersey City's Little Manila, to Summit Avenue and the Five Corners neighborhood. 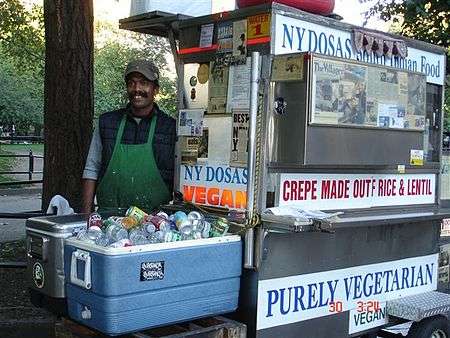 A street vendor hawking dosas at Washington Square Park in Lower Manhattan, surrounded by the buildings of New York University. 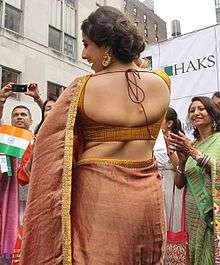 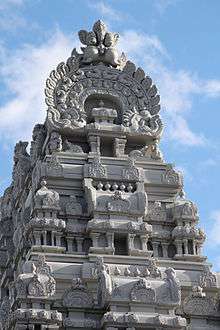 The annual New York City India Day Parade, held on or approximately every August 15 since 1981, is the world's largest Indian Independence Day parade outside of India[49] and is hosted by The Federation of Indian Associations (FIA). According to the website of Baruch College of the City University of New York, "The FIA, which came into being in 1970 is an umbrella organization meant to represent the diverse Indian population of NYC. Its mission is to promote and further the interests of its 500,000 members and to collaborate with other Indian cultural organization. The FIA acts as a mouth piece for the diverse Indian-Asian population in United States, and is focused on furthering the interests of this diverse community. The parade begins on East 38th Street and continues down Madison Avenue in Midtown Manhattan until it reaches 28th Street. At the review stand on 28th Street, the grand marshal and various celebrities greet onlookers. Throughout the parade, participants find themselves surrounded by the orange, white and green colors of the Indian flag. They can enjoy Indian food, merchandise booths, live dancing and music present at the Parade. After the parade is over, various cultural organizations and dance schools participate in program on 23rd Street and Madison Avenue until 6PM."[51]

In September 2014, approximately 19,000 Indian Americans attended a speech delivered onstage by Indian Prime Minister Narendra Modi at Madison Square Garden in Midtown Manhattan.[52][53] This appearance was televised live worldwide and was estimated to have been watched by a billion-strong global audience of Indians in India and overseas.

Indians in New York and New Jersey, as in the United States as a whole, are highly fluent in English. However, multiple Indic (Hindi (हिन्दी), Gujarati (ગુજરાતી), Punjabi (ਪੰਜਾਬੀ), and Bengali (বাংলা)) and Dravidian (Tamil (தமிழ்), Telugu (తెలుగు), Malayalam (മലയാളം), and Kannada (ಕನ್ನಡ)) languages are spoken at home and with local media incorporating these languages available for viewership.[54]

Indian cuisine is very popular among Asian Indians in the United States. The growth in the New York City metropolitan region's Asian Indian populace has been accompanied by growth in the number of Indian restaurants, located both within and outside of traditional Indian enclaves, such that within New York City proper alone, there are hundreds of Indian restaurants.[55] According to David Shaftel of The New York Times in December 2014, the food at New York City's many chain restaurants is worthy of their flagships in India; the Midtown Manhattan neighborhood south of Murray Hill, namely Rose Hill, has been nicknamed Curry Hill, and provides an abundance of multinational India-based chains specializing in South Indian cuisine.[55]

In 1968, a family of Bengali brothers inaugurated the restaurant Shah Bag at 320 East 6th Street in the East Village of Lower Manhattan, followed by others, with the intention of "making an Indian street".[48] In time, this stretch of East 6th Street between First and Second Avenues evolved the nickname Curry Row, with a dense collection of North Indian restaurants.

Water purity and availability are a lifeline for the economy of Indians in the New York City metropolitan region, particularly in the Little Indias. New York City is supplied with drinking water by the protected Catskill Mountains watershed.[56] As a result of the watershed's integrity and undisturbed natural water filtration system, New York is one of only four major cities in the United States the majority of whose drinking water is pure enough not to require purification by water treatment plants.[57] The Croton Watershed north of the city is undergoing construction of a US$3.2 billion water purification plant to augment New York City's water supply by an estimated 290 million gallons daily, representing a greater than 20% addition to the city's current availability of water.[58] The ongoing expansion of New York City Water Tunnel No. 3, an integral part of the New York City water supply system, is the largest capital construction project in the city's history,[59] with segments serving Manhattan and The Bronx completed, and with segments serving Brooklyn and Queens planned for construction in 2020.[60] Much of northern and central New Jersey is provided by reservoirs to provide fresh water, but numerous municipal wells exist which accomplish the same purpose.

Momentum has been growing to recognize the Hindu holy day Deepavali (Diwali) as a holiday on school district calendars in the New York City metropolitan region.[63][64] Passaic, New Jersey established Diwali as a school holiday in 2005.[63][64] South Brunswick, New Jersey in 2010 became the first of the many school districts with large Indian student populations in Middlesex County to add Diwali to the school calendar.[64] Glen Rock, New Jersey in February 2015 became the first municipality in Bergen County, with its own burgeoning Indian population post-2010,[33][65] to recognize Diwali as an annual school holiday,[66][67] while thousands in Bergen County celebrated the first U.S. county-wide Diwali Mela festival under a unified sponsorship banner in 2016.[68]

Efforts have been undertaken in Millburn,[63] Monroe Township (Middlesex County), West Windsor-Plainsboro, Bernards Township, and North Brunswick, New Jersey,[64] Long Island, as well as in New York City,[69][70] among other school districts in the metropolitan region, to make Diwali a holiday on the school calendar. According to the Star-Ledger, Edison, New Jersey councilman Sudhanshu Prasad has noted parents' engagement in making Deepavali a holiday there; while in Jersey City, the four schools with major Asian Indian populations mark the holiday by inviting parents to the school buildings for festivities.[64]

Cricket is one of the fastest-growing sports in the New York City metropolitan region, particularly in Central New Jersey. In 2016, a public park was expanded in Monroe Township, Middlesex County in Central Jersey to accommodate a designated cricket pitch, among other facilities.

Indian pharmaceutical companies are coming to New Jersey to gain a foothold in the United States.[71] Dr. Reddy's Laboratories, based in Hyderabad, set up its U.S. headquarters in Princeton, New Jersey.[72] Kitex Garments, based in Kerala and India's largest children's clothing manufacturer, opened its first U.S. office in Montvale, New Jersey in October 2015.[73] Pharmaceutical company Aurobindo, also headquartered in Hyderabad, has established its U.S. headquarters in the Dayton section of South Brunswick, Middlesex County, New Jersey, and is implementing a multi-million dollar expansion of these Central New Jersey operations.[74]