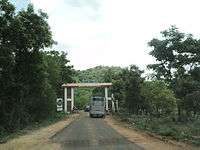 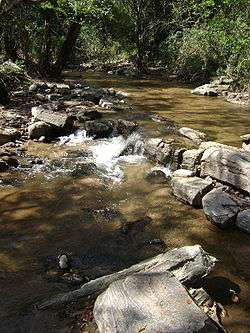 Athioda stream at the park 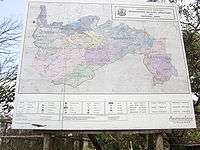 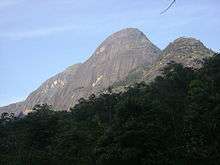 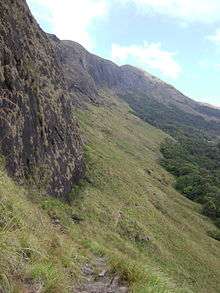 Akka Malai (at rear) at top of Bison Ridge

The park is named after former Prime Minister of India Indira Gandhi who visited the park on 7 October 1961. "Topslip" located in the northeast corner of the park is derived from the local 19th century practice of sliding timber logs down the hills from here.[3]

By the mid-1800s, large tracts of Valparai plateau in the Anamalais were under intense tea or coffee plantations after deforestation of the natural forests. By 1866 two-thirds of the plantations were owned by Europeans and the remaining by Indians from coastal towns. Since most native inhabitants either refused to work or were inefficient workers, labour for plantations was brought from the plains of Tamil Nadu to clear forests and grow coffee.

Some parts of the forest however were reserved for timber including large areas around Top Slip. This part of the Western Ghats, under the Bombay Presidency were exploited extensively for teak which was supplied to the Bombay Dockyard for shipbuilding and later for railroad ties.[4]

In 1855, this area came under sustainable forest management for teak plantations by the pioneering efforts Douglas Hamilton and Dr. H. F. Cleghorn of the new Tamil Nadu Forest Department. In the early 1900s, protection of the Karian Sholas was also ensured (Johnsingh 2006a).[5]

The area was notified as Anaimalai Wildlife Sanctuary in 1974. of its unique habitats at 3 places – Karian Shola, Grass hills, Manjampatti Valley were notified as a National Park in 1989. The 108 square kilometres (42 sq mi) National Park is the core area of the 958 square kilometres (370 sq mi) Indira Gandhi Wildlife Sanctuary.[1] IGWS was declared a Project Tiger tiger reserve in 2008.

The Park and the Sanctuary is under consideration by UNESCO as part of The Western Ghats World Heritage site.[6] The Sanctuary and the Palni Hills in Dindigul District form the Anaimalai Conservation Area.[7]

Mean annual rainfall is between 500 millimetres (20 in) in the south western fringes and 4,500 millimetres (180 in) on the north east. This Sanctuary is an important watershed for the agricultural economy and power supply in other parts of Tamil Nadu. Major reservoirs like Parambikulam Reservoir, Aliyar Reservoir, Thirumurthi Reservoir, Upper Aliyar Reservoir, Kadambarai, Sholayar Dam and Amaravathi Dam are fed by the perennial rivers which originate from the Sanctuary.[1]

The IGWS has significant anthropological diversity with more than 4600 Adivasi people from six tribes of indigenous people living in 34 settlements. The tribes are the Kadars, Malasars, Malaimalasar s, Pulaiyars, Muduvars and the Eravallan (Eravalar).[8][9]

Threatened species of mammals in the sanctuary include:

It is home to 15 of 16 species of birds endemic to the Western Ghats.

315 species of butterflies belonging to five families have been identified in the Anaimalai Hills. 44 are endemic to the Western Ghats.[10] 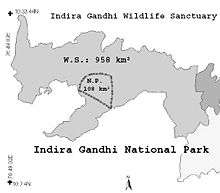 The Steering Committee of Project Tiger granted approval in principle to inclusion of Indira Gandhi WLS and NP under Project Tiger in 2005.[11] IGWS was declared a Project Tiger sanctuary in 2008.[12] Continuance of Project Tiger' in Anamalai Tiger Reserve for FY 2010/11, at the cost of Rs. 23547,000, was approved by the National Tiger Conservation Authority on 31 August 2010.[13]

This tiger reserve, together with the several other contiguous protected forest and grassland habitats, is the core of the Parambikulum-Indira Gandhi tiger habitat landscape complex, with tiger occupancy area of about 3,253 km2 (1,256 sq mi) and an estimated metapopulation of 34 (32 to 36) tigers.[5] 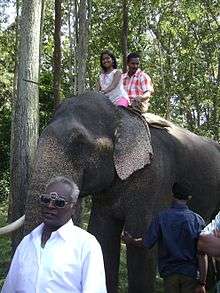 Elephants were earlier trained and used at Anamalai for timber operations till felling of trees was stopped in 1972. The elephant camp has become a popular public attraction since 1976. There are 20 kumki elephants at the Kozhikamudhi Elephant Camp in the IGWSNP. There are 13 tuskers (including three calves) and seven cow elephants. The names and ages of twelve of the working elephants are: Vijayalakshmi (58), Sarada (56), Nanjan (50), Kaleem (45), Paari (31), Kalpana (30), Venkatesh (28), Karthik (27), Bharani (25), Durga (13), Rajvardhan (11) and Suyambu (4).[14]

In 1997, annual celebration of Elephant Pongal at Top Slip was begun. For Pongal, several decorated elephants stand in front of the Pongal pot to mark the commencement of the celebration. The elephants are fed chakkarai pongal, banana and sugarcane while lined up behind a barricade, so tourists can have a close look. In 2011, Elephant Pongal was celebrated on 18 January.[14]

On 24 February 2011 the Kumki Karthik was gored to death by two wild male elephants after it unchained itself in the camp and escaped into the forest. The elephant was in musth and was in search of a female companion. It was gored by the two elephants possibly because Karthik entered their habitation leading to a territorial conflict.[15] 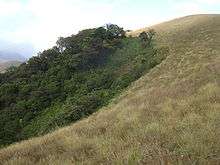 The park is home to a wide variety of flora and fauna typical of the South Western Ghats. There are over 2000 species plants of which about 400 species are of prime medicinal value. The diverse topography and rainfall gradient allow a wide variety of vegetation comprising a mix of natural and man-made habitats. The former includes wet evergreen forest and semi-evergreen forest, montane shola-grassland, moist deciduous, dry deciduous, thorn forests and marshes. Tropical wet evergreen forest is found at an altitude of 600m to 1,600m. 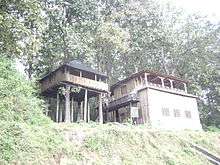 A lodge at Top Slip

The IGWLS is managed by the Wildlife Warden and falls within the administrative control of the Coimbatore Forest Circle headed by the Conservator of Forests, Coimbatore. The park has a large tourist complex at Top Slip that houses many cottages, rooms, and dormitories for visitors. Visitors can get around the park by trekking and a safari van.[1][3]