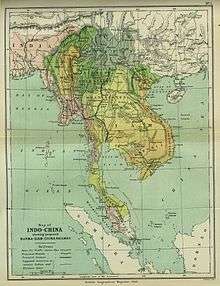 1886 map of Indochina, from the Scottish Geographical Magazine

Indochina, originally Indo-China, is a geographical term originating in the early nineteenth century and referring to the continental portion of the region now known as Southeast Asia. The name refers to the lands historically within the cultural influence of India and China, and physically bound by the Indian Subcontinent in the west and China in the north. It corresponds to the present-day areas of Myanmar, Thailand, Laos, Cambodia, Vietnam, and (variably) peninsular Malaysia. The term was later adopted as the name of the colony of French Indochina (today's Vietnam, Cambodia and Laos), and the entire area of Indochina is now usually referred to as the Indochinese Peninsula or Mainland Southeast Asia.

The origins of the name Indo-China are usually attributed jointly to the Danish-French geographer Conrad Malte-Brun, who referred to the area as indo-chinois in 1804, and the Scottish linguist John Leyden, who used the term Indo-Chinese to describe the area's inhabitants and their languages in 1808.[1] Scholarly opinions at the time regarding China's and India's historical influence over the area were conflicting, and the term was itself controversial—Malte-Brun himself later argued against its use in a later edition of his Universal Geography, reasoning that it over-emphasized Chinese influence, and suggested Chin-India instead.[2] However, Indo-China had already gained traction and soon supplanted alternative terms such as Further India and the Peninsula beyond the Ganges. Later, though, as the French established the colony of French Indochina, use of the term became more restricted to the French colony,[3] and today the area is usually referred to as Mainland Southeast Asia.[4]

In biogeography, the Indochinese Region is a major biogeographical region in the Indomalaya ecozone, and also a phytogeographical floristic region in the Paleotropical Kingdom. It includes the native flora and fauna of all the countries above. The adjacent Malesian Region covers the Maritime Southeast Asian countries, and straddles the Indomalaya and Australasian ecozones.