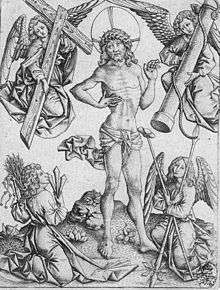 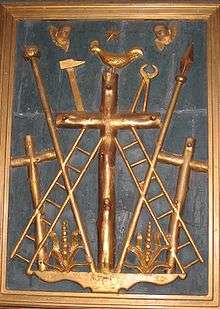 The instruments of the Passion. Left to right: the cross of Dismas, ladder, sponge on reed, hammer, angels, Cross of Christ, cock, star, pincers, ladder, spear, cross of the wicked thief, and two hyssop plants growing from the ground (église Saint-Pierre de Collonges-la-rouge). 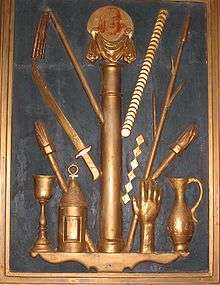 Arma Christi ("Weapons of Christ"), or the Instruments of the Passion, are the objects associated with Jesus' Passion in Christian symbolism and art. They are seen as arms in the sense of heraldry, and also as the weapons Christ used to achieve his conquest over Satan. There is a group, at a maximum of about 20 items, which are frequently used in Christian art, especially in the Late Middle Ages. Typically they surround either a cross or a figure of Christ of the Man of Sorrows type, either placed around the composition, or held by angels.

The prime member, the Cross, had been introduced to Christian art in the 4th century as the crux invicta, a symbol of victory. As a group they have a long tradition in iconography, dating back to the 9th century; the Utrecht Psalter of 830 is an example, though the only one from the Early Middle Ages known to Gertrud Schiller. This reflected an increase in theological interest in the sufferings of Christ at the time.[1] The Middle English poem Arma Christi, which appeared before the end of the 14th century, exists in fifteen manuscripts, attesting to its popularity, of which seven are engrossed in highly unusual scroll form, designed to be displayed in church as a pictorial aid to public devotion; manuscripts of Arma Christi are generally accompanied by illustrations of the instruments, viewing of which, according to the texts, granted indulgence of a certain number of days in Purgatory to come.[2]

Relics of the most important items had a long history, dating back to the Empress Helena's discovery of the True Cross in the early 4th century. Relics claiming to be the Holy Lance, Holy Sponge, Holy Chalice and nails from the cross were all venerated well before 1000, and were to proliferate in later centuries. There was a wave of new relics in the West at the time of the Crusades, and a further wave as the Instruments became featured more prominently in devotional literature and practices in the 14th century.[3]

In art the Instruments either surrounded an image of Christ in andachtsbilder subjects such as the Man of Sorrows, or might appear by themselves - often the image of Christ's face on the Veil of Veronica was the focal point of the image. In both cases the purpose of the representations was to symbolize the sufferings of Christ during his Passion. They had the practical advantage for less accomplished artists of being much easier to represent than human figures, and were no doubt often treated as a subject an apprentice could be left to do. Possibly the earliest representation of the isolated instruments laid out across a space is in a drawing in a German manuscript of about 1175, where they are to one side of a Christ in Majesty.[4] In devotional books they were sometimes, by the Late Middle Ages, shown one at a time, accompanying one of the many texts that devoted meditations in turn to the episodes in which each had been used, before culminating in a figure subject with Jesus.[5] Miniature versions of the objects were attached to rosaries and crucifixes, and used as aids to contemplation of the suffering of Christ.

Depictions of the Instruments of the Passion may include many combinations of those following (though the cross of Jesus is almost always represented). A primary group of the most frequently used instruments can be distinguished:

Other common ones are:

The principal group of the Instruments appear in other contexts as well. The lance and sponge on a stick are held as though they are standards or weapons by the archangels flanking the throne of Christ in a 6th-century mosaic from Ravenna (now Belin), and are often shown in this way thereafter, especially in scenes of the Last Judgement. In Eastern Orthodox art they are often on or around the Hetoimasia or "empty throne" of judgement.[6] The Crown of Thorns sometimes hangs alone on the cross; it has been suggested that the Celtic cross originated from this motif. The minor Instruments generally did not developed a sufficient ability to be recognised and understood in this way, and appear only in groups.