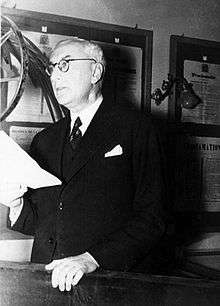 The International Institute of Social History (IISG) is one of the largest archives for labour, left and social history in the world. It is an independent scientific institute in Amsterdam (the Netherlands). the IISG is part of the Royal Netherlands Academy of Arts and Sciences. It was founded in 1935 by Nicolaas Posthumus. The large archives of the institute (ca. 50 km) harbour invaluable and extensive papers of several international social movements and currents, including the papers of Rosa Luxemburg, Friedrich Engels, Karl Marx and Mikhail Bakunin.[1]

History of the institute

The International Institute of Social History was founded in 1935 by Nicolaas Posthumus.[2] To examine how labour relations develop over time, IISG collected archives from all over the world. During the first years Posthumus succeeded in obtaining many papers from anarchist (Bakunin manuscripts), other socialist and social democratic and Marxist movements from Germany and Russia.

Before the Germans invaded the Netherlands in 1940, Posthumus was able to move the most valuable archives to London. During the war, many remaining IISG archives were transported to Nazi Germany. Fortunately, they were not destroyed. Most of the papers were rediscovered in Hannover in 1946, and some other parts were later found in archives in Moscow in 1991, and returned to Amsterdam.[3]

In 1989 the International Institute of Social History moved to new premises: an old warehouse at the Cruquiusweg in the eastern part of Amsterdam. The building also houses the Press Museum.

There are also many institutional archives, among which the archives of the Russian Socialist Revolutionary Party, the Red Army Faction and the International Confederation of Free Trade Unions (well over 200 metres). In the last decades the IISG also acquired the archives of Greenpeace and Amnesty International.

A related institution is the Swiss Social Archives in Zurich.