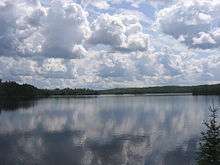 Sections of Canada and the United States, including in the Boundary Waters Canoe Area Wilderness, above, are separated by water. A particularly extensive section of the Canada–US border is in the Great Lakes.

The International Joint Commission is an independent binational organization established by the United States and Canada under the Boundary Waters Treaty of 1909. Its responsibilities were expanded with the signing of the Great Lakes Water Quality Agreement of 1978 (later amended 1987 and 2012).[1]

The purpose of the Commission is to help prevent and resolve disputes about the use and quality of boundary waters and to advise Canada and the United States on questions about water resources. It was consulted for decades during the development of the St. Lawrence Seaway, and the many bridges that have been constructed as international border crossings over the St. Lawrence River and other waterways. The Commission holds public meetings every two years.

Since the late 20th century, it has regularly discussed progress in cleaning up environmental problems of the Great Lakes, as well as issues related to commercial and recreational use of boundary rivers and trans-national rivers. It also sponsors conferences, meetings and round-table discussions, in which members of the public and representatives of community groups and other organizations can take part.

The Commission can alert governments to emerging issues along the border. Its recommendations to the Canada and United States governments are not binding, although they are usually accepted by both governments.[2]

The Commission has jurisdiction over the Great Lakes–Saint Lawrence River waters and other waters along the border. In the west, the Commission established conditions for dams on the Kootenay, Okanogan, and Columbia rivers, which cross through the states of Washington, Idaho and Montana, and the province of British Columbia. The Commission has also assisted in drafting rules for sharing the St. Mary and Milk rivers in Alberta, Saskatchewan and Montana.

The Commission has been involved in how the Souris River and Red River systems are shared among Saskatchewan, Manitoba and North Dakota. It also sets emergency water levels for the Rainy Lake system, including the Lake of the Woods, which crosses through Minnesota, Manitoba and Northwestern Ontario. Protection of Rainy River water quality is also addressed by the IJC. In the east, the Commission regulates dams and protects the water quality on the St. Croix River, which flows through New Brunswick and Maine.

The Commission has three offices, in Ottawa, Washington, DC, and Windsor, Ontario. The Windsor Great Lakes Regional Office (GLRO) was created under the Great Lakes Water Quality Agreement (GLWQA). It is staffed by a bi-national team of U.S. and Canadian scientists and support staff.

Separate boards are responsible for particular boundary waters issues. When there are special issues, a Task Force is assigned to make a report or recommendations. The various standing bodies are: