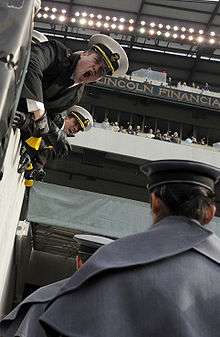 Interservice rivalry is the rivalry between different branches of a country's armed forces, in other words the competition for limited resources among a nation's land (army), naval, and air forces.[1] The term also applies to the rivalries between a country’s intelligence services (e.g. CIA and FBI in the United States), or between the police and fire services of a city, such as the NYPD and FDNY.[2]

Interservice rivalries occur at all levels of the military, from the vying for key posts such as Chairman of the Joint Chiefs of Staff in the United States, Chief of the Defence Staff in the United Kingdom, or Jefe del Estado Mayor de la Defensa in Spain.

Interservice rivalry can occur over such topics as the appropriation of the military budget, prestige or the possession of certain types of weapons.[1] The latter case can arise, for example, when the navy operates an aircraft carrier, which may be viewed by the air force as an infringement of its traditional responsibilities. Another case was the dispute between the Indian Army and Indian Air Force, which erupted when these two branches fought over the ownership of AH-64D Apache Longbow helicopters in 2012.[3]

Such rivalries are often seen as negative influences on the effectiveness of a country's armed forces. However, they also serve as a balancing factor, introducing some of the desirable effects of competition to an otherwise traditionally very closed and centralized institution.

In Nazi Germany there was constant rivalry between the Wehrmacht (the combined armed services of the Third Reich) and the Waffen-SS since they were often in parallel order of battle situations, particularly with regard to armored divisions. In part fueled by his own political differences with the Heer, Hermann Göring created the Luftwaffe Field Division a third parallel ground-fighting force under the command of the Luftwaffe. The German Fallschirmjaeger (parachutists) were also part of the Luftwaffe (Air Force) for most of the Second World War until they were finally subordinated to the Heer at the end of 1944. The Luftwaffe and Kriegsmarine were also at odds over various issues throughout the war years, with such issues as the format for the Bordfliegergruppe air units that were to be based aboard the embryonic force of German aircraft carriers, with the never-finished carriers whose hulls had been laid down before the start of World War II.

Adolf Hitler actively encouraged interservice rivalries within Nazi Germany, due to a belief in a "survival of the fittest" principle that competition would result in weeding out the weaker elements. Generally this proved to be a disaster: with no clear chains of responsibility, contradicting orders were often given, and the different services were at odds when fast coordinated action was vital.

Infighting between the Indian Army and Indian Air Force (IAF) over armed helicopters has existed for a decade; this came to light during the Kargil War in 1999.[3]

In response to the request for Army-owned attack helicopters from General Bikram Singh, Chief of Army Staff, the Indian government made an agreement about the transfer of IAF AH-64D Apache Longbows to the Army in 2012. The IAF, however, acted stiff resistance against the decision, and insisted that all attack and medium-lift helicopters be under its control.

In 2013, Air Chief Marshal NAK Browne, who faced against the Army for the helicopter issue, said that the AH-64Ds would be kept in the Air Force.[4]

The long-term discord between the Imperial Japanese Army and Imperial Japanese Navy was one of the most notorious examples of inter-service rivalry. The situation, with its origin traced back to Meiji period, came with geo-political consequences leading to Japan's involvement in World War II. The IJA/IJN rivalry expressed itself in the early 1930s as the “strike north” (Hokushin-ron) and “strike south” (Nanshin-ron) factions. The goal of both factions was to seize territories which possessed the raw materials, especially petroleum, which Japan needed to sustain its growth and economy, but which it did not possess itself. The strike north faction advocated the taking of the natural resources of Siberia, by way of Manchuria, a scenario in which the prime role would be taken by the Army, the strike south faction advocated the taking of Indonesia, a scenario in which the Navy would predominate.

In order to further their own faction relatively junior officers resorted to the assassinations of members of the rival faction and their supporters in government. With both factions being opposed to the peace faction, this period has become known as the era of Government by assassination. Insubordination by the Kwantung Army led first to the occupation of Manchuria, and later the Second Sino-Japanese War following the Marco Polo Bridge Incident. However at the Battles of Khalkhin Gol any farther expansion northwards into Siberia was shown to be impossible given the Soviet superiority in numbers and armour.

With the loss of Army prestige, that followed the failure of the Soviet–Japanese border conflicts, the Navy faction gained the ascendency, supported by a number of the powerful industrial Zaibatsus, that were convinced that their interests would be best served fulfilling the needs of the Navy, and this paved the way to the Pacific War.

The IJA and IJN rivalry also saw both services developing air arms, the Army creating its own amphibious infantry units and running ships and submarines, including submarine chasers and aircraft carriers, the Navy meanwhile would create its own infantry and marine paratroopers.

Other examples of this rivalry include the Japanese Navy taking several weeks to inform the Army of the disastrous results of the Battle of Midway.

Pakistani Armed Forces used to fight over a number of issues. One in particular was predominantly between the Navy and the Army over budget distribution. A key point of friction was the induction of the cruiser PNS Babur. This was resolved, however, when Pakistani think tanks realized the need for interservice harmony and established the Joint Services Headquarters. This unified headquarters has almost eliminated the friction between the services.

A case in point is the rivalry between the Parachute Regiment and the Royal Marines, which are part of the Army and the Royal Navy, respectively, in the UK. Since some of their capabilities overlap, pressure can be put on the political or civilian decision makers to choose one or the other.

Another form of rivalry within the United Kingdom is between certain forces of the Cadets: the Sea Cadet Corps, the Army Cadet Force, and the Air Training Corps; and between the Coldstream Guards and the Grenadier Guards, over the issue of seniority.

The U.S. Department of Defense was originally created to provide overall coordination for the various branches of the U.S. armed services, whose infighting was seen as detrimental to military effectiveness during World War II.

The rivalries are also based on services' individual philosophies for rules and behavior. An author wrote in 2012 about the differing cultures of the United States Navy and United States Air Force's pilots:[5]

In some ways rivalries can encourage positive outcomes, such as improving the esprit de corps of a given branch of the military.

Marines and sailors compete in a Strong-Man Competition

Various mechanisms are used to manage or curb interservice rivalries. In the United States military, for example, an officer must complete at least one joint tour in another service to reach the level of Flag or General Officer. Such officers may be described as "wearing purple," a reference to the Army's green, the Marines' navy blue, the Air Force's blue, the Navy's white, and the Coast Guard's blue uniforms.

One well-known encounter, the Revolt of the Admirals, took place after the end of World War II. The newly created Air Force, sought to create a doctrine which relied heavily on strategic long-range bombing and the Army a large number of reservist troops. Both the Air Force and the Army claimed that the future of warfare depended on the issue of nuclear deterrent, and as such the use of naval gunfire and support, as well as the amphibious assault doctrine of the Marines, was outdated and would never be used again. The Secretary of Defense Louis A. Johnson succeeded to strip the Navy of funds on its first Supercarrier, the United States. This cancellation caused multiple high ranking Navy personnel to resign. The aftermath caused Congress to review, and after investigation enabled the implementation of the creation of a Strategic Air Force supporting a nuclear mission.

Interservice rivalries are often played out at divisional or regimental level or between special forces that are part of different services. The rivalry between special-forces units led to the creation of United Kingdom Special Forces in the United Kingdom, and SOCOM in the United States to put them all under a unified command, putting an end to the "rice-bowl" doctrine which created absurd situations in Iran, Grenada and Panama in the 1980s. In the United Kingdom it has put an end to members of the Special Boat Service being recruited solely from the Royal Marines and it is now a tri-service branch.