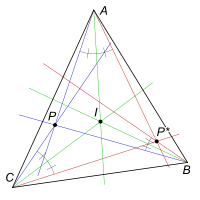 Isogonal conjugate transformation over the points inside the triangle.

is a commutative group, and the inverse of each X in S is X −1.