Not to be confused with Palestinian Independence Party. 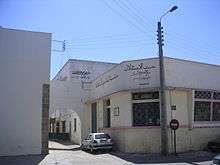 The Istiqlal or Independence Party (Arabic: حزب الإستقلال Ḥizb Al-Istiqlāl, French: Parti de l'Istiqlal) is a political party in Morocco. It is a conservative and monarchist party and a member of the Centrist Democrat International and International Democrat Union. Since 2013 the official opposition, Istiqlal previously headed a coalition government under Abbas El Fassi from 19 September 2007 – 29 November 2011.

The party was founded in April 1937[3] as the National Party for Istiqlal, and became the Istiqlal Party the 10th December 1943.[4][5] Istiqlal held strongly nationalist views and was the main political force struggling for the independence of Morocco. The party was often critical of the ruling monarchy, after being instrumental in gaining independence from French colonialism. Independence was achieved in 1956, and the party then moved into opposition against the monarchy, which had asserted itself as the country's main political actor. Together with the leftist National Union of Popular Forces (UNFP), which split from Istiqlal in 1959, and later the Socialist Union of Popular Forces (USFP), the Istiqlal would form the backbone of the opposition to King Hassan II in the years to come. The Istiqlal party has taken part in many coalition governments from the late 1970s until the mid-1980s. In 1998, together with the USFP inside the Koutla and other smaller parties, the Istiqlal formed the Alternance, the first political experience in the Arab World where the opposition assumed power through the ballots.

For the party's leader Allal El Fassi, a proponent of "Greater Morocco", Morocco's independence would not be complete without the liberation of all the territories that once were part of Morocco.

Istiqlal won 52 out of 325 seats in the parliamentary election held on 7 September 2007, more than any other party,[6] and subsequently the party's leader, Abbas El Fassi, was named Prime Minister by King Mohammed VI on 19 September 2007.[6][7]

In 2016, Istiqlal won 46 seats in parliamentary elections, a loss of 14 seats. The party rejoined the opposition.