J. B. Lippincott & Co. was an American publishing house founded in Philadelphia, Pennsylvania in 1836 by Joshua Ballinger Lippincott. It was incorporated in 1885 as J. B. Lippincott Company.[1]:26–29 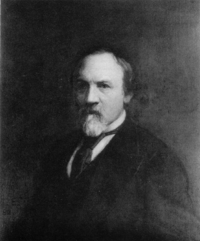 J. B. Lippincott & Co. began business publishing Bibles and prayer books before expanding into history, biography, fiction, poetry, and gift books. The company later added almanacs, medicine and law, school textbooks, and dictionaries. In 1849, Lippincott acquired Grigg, Elliot & Co., a significant publisher and wholesaler whose origins dated back to printer and bookseller Benjamin and Jacob Johnson in 1792. In 1850 J. B. Lippincott & Co. became Lippincott, Grambo & Co. but reverted to its former name in 1855. The company was incorporated in 1878 as J. B. Lippincott Company. Lippincott published the first textbook of nursing in the US in 1878 and the first issue of the American Journal of Nursing in 1900.[2] By the end of the 19th century, Lippincott was one of the largest and best-known publishers in the world.[1]:16 Lippincott's Monthly Magazine, a popular periodical containing a complete novel, short stories, poetry, and opinion, was published in the US and the UK from 1868 to 1914. During the 20th century Lippincott also became a major publisher of schoolbooks for elementary and high school education and of references, textbooks, and journals in medicine and nursing.[1]:44–48

One editor asked Patrick O'Brian to write a book of nautical fiction following the death of author C. S. Forrester, who wrote the Horatio Hornblower series for another publishing house. O'Brian's first historical novel in what became a series of 20 completed novels, Master and Commander was published in 1969.[3] Collins in the UK took up the series, until W. W. Norton & Company "discovered" the series in 1991, re-publishing all books before 1991 in the US as paperbacks, then publishing at the same time as the British publisher until the last completed novel in 1999.[4] Without Lippincott's insight, the series would not have been written.

In 1978, J. B. Lippincott Company was acquired by Harper & Row Publishers, Inc. Lippincott's trade, juvenile and elementary and high school divisions were merged into Harper's. The remaining publishing activities, in medicine, nursing, and allied health, were combined with Harper's programs to form "J.B. Lippincott - the Health Professions Publisher of Harper & Row." In 1990, the company was acquired by Wolters Kluwer N.V. of The Netherlands. The J. B. Lippincott Company celebrated its 200th anniversary in 1992.[1]:44–48 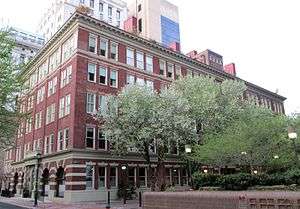 The J. B. Lippincott Headquarters Building, built in 1900 on S. 6th Street across from Washington Square, and designed by William B. Pritchett in the Italianate style