Jack and the Beanstalk

This article is about the fairy tale. For other uses, see Jack and the Beanstalk (disambiguation). For the hero, see Jack (hero).

"Jack and the Beanstalk" is an English fairy tale. It appeared as "The Story of Jack Spriggins and the Enchanted Bean" in 1734[1] and as Benjamin Tabart's moralised "The History of Jack and the Bean-Stalk" in 1807.[2] "Felix Summerly" (Henry Cole) popularised the tale in The Home Treasury (1842),[3] and Joseph Jacobs rewrote it in English Fairy Tales (1890).[4] Jacobs' version is most commonly reprinted today and it is believed to be closer to the oral versions than Tabart's because it lacks the moralising.[5]

"Jack and the Beanstalk" is the best known of the "Jack tales", a series of stories featuring the archetypal Cornish and English hero and stock character Jack.[6]

According to researchers at the universities in Durham and Lisbon, the story originated more than 5,000 years ago, based on a widespread archaic story form which is now classified by folkorists as ATU 328 The Boy Who Stole Ogre's Treasure.[7]

Jack is a young, poor boy living with his widowed mother and a cow as their only source of income. When the cow stops giving milk, Jack's mother tells him to take it to the market to be sold. On the way, Jack meets an old man who offers magic beans in exchange for the cow, and Jack makes the trade. When he arrives home without any money, his mother becomes angry, throws the beans on the ground, and sends Jack to bed without dinner.

During the night, the magic beans cause a gigantic beanstalk to grow. The next morning, Jack climbs the beanstalk to a land high in the sky. He finds an enormous castle and sneaks in. Soon after, the castle's owner, a giant, returns home. He senses that Jack is nearby, and speaks a rhyme:

Fee-fi-fo-fum!
I smell the blood of an Englishman,
Be he alive, or be he dead,
I'll grind his bones to make my bread.[4]

In the versions in which the giant's wife features, she persuades him that he is mistaken. When the giant falls asleep Jack steals a bag of gold coins and makes his escape down the beanstalk.

Jack and his mother live happily ever after with the riches that Jack acquired. 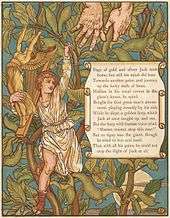 "The Story of Jack Spriggins and the Enchanted Bean" was published in the 1734 second edition of Round About Our Coal-Fire.[1] In 1807, Benjamin Tabart published The History of Jack and the Bean Stalk, but the story is certainly older than these accounts. According to researchers at Durham University and the Universidade Nova de Lisboa, the story originated more than 5,000 years ago.[7]

In some versions of the tale, the giant is unnamed, but many plays based on it name him Blunderbore. (One giant of that name appears in the 18th-century "Jack the Giant Killer".) In "The Story of Jack Spriggins" the giant is named Gogmagog.

"Jack and the Beanstalk" is an Aarne-Thompson tale-type 328, The Treasures of the Giant, which includes the Italian "Thirteenth" and the French "How the Dragon was Tricked" tales. Christine Goldberg argues that the Aarne–Thompson system is inadequate for the tale because the others do not include the beanstalk, which has analogies in other types[9] (a possible reference to the genre anomaly.)[10]

The Brothers Grimm drew an analogy between this tale and a German fairy tale, "The Devil With the Three Golden Hairs". The devil's mother or grandmother acts much like the giant's wife, a female figure protecting the child from the evil male figure.[11]

"Jack and the Beanstalk" is unusual in some versions in that the hero, although grown up, does not marry at the end but returns to his mother. In other versions he is said to have married a princess. This is found in few other tales, such as some variants of "Vasilisa the Beautiful".[12]

The original story portrays a "hero" gaining the sympathy of a man's wife, hiding in his house, robbing, and finally killing him. In Tabart's moralised version, a fairy woman explains to Jack that the giant had robbed and killed his father justifying Jack's actions as retribution.[13] (Andrew Lang follows this version in the Red Fairy Book of 1890.)

Jacobs gave no justification because there was none in the version he had heard as a child and maintained that children know that robbery and murder are wrong without being told in a fairy tale, but did give a subtle retributive tone to it by making reference to the giant's previous meals of stolen oxen and young children.[14]

Many modern interpretations have followed Tabart and made the giant a villain, terrorising smaller folk and stealing from them, so that Jack becomes a legitimate protagonist. For example, the 1952 film starring Abbott and Costello the giant is blamed for poverty at the foot of the beanstalk, as he has been stealing food and wealth and the hen that lays golden eggs originally belonged to Jack's family. In other versions it is implied that the giant had stolen both the hen and the harp from Jack's father. Brian Henson's 2001 TV miniseries Jack and the Beanstalk: The Real Story not only abandons Tabart's additions but vilifies Jack, reflecting Jim Henson's disgust at Jack's unscrupulous actions.[15] 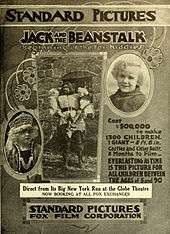