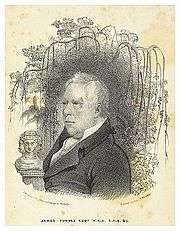 Born in London to a Scots family, Forbes travelled to India in 1765 as a writer for the British East India Company and was resident there until 1784. He was a prolific writer and artist and filled 52,000 manuscript pages with notes and sketches concerning all aspects of Indian life, its wildlife, flora and architecture. In 1781 he visited the Taj Mahal and became one of the first Europeans to draw it. After returning to England he married and toured continental Europe extensively until returning to England once more to write Oriental Memoirs. Largely based on his notes and sketches, it was subtitled selected and abridged from a series of familiar letters written during seventeen years residence in India: including observations on parts of Africa and South America, and a narrative of occurrences in four India voyages was published in volumes beginning in 1813.[1] The book remains a universally valued document of the culture, flora and fauna of India at the time. Forbes also published a work in 1810 which advocated the conversion of Hindus to Christianity.[2]