This article is about the Irish officer of arms. For the American mixed martial artist, see James Terry (fighter). 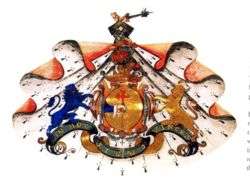 The arms of Sir Rory O'Donnell, 1st Earl of Tyrconnell (1603), exemplified in a genealogy provided to Daniel O'Donnell by James Terry in 1709

James Terry (Limerick, Ireland, 26 May 1660 - Paris, France 1725) was an Irish officer of arms who remained faithful to the Jacobite kings of Britain after their escape to the European continent.

Terry was born in Limerick, 1660, to John Terry, from Cork, and wife Mary Ronan. After the defeat of James II of England, the court went into exile in St Germain, France. James Terry had been serving as Athlone Pursuivant of Arms in Ordinary at the Irish Office of Arms, and took his seal of office and his heraldic records with him to France. As James II still considered himself King of England, Scotland, and Ireland, he needed a herald with him to handle matters of heraldry and ceremonial. In 1690, he appointed Terry to the post of Athlone Herald.

It is interesting to consider that during the exile, Terry was in communication with English and Scottish heralds when it became necessary to verify armorial records and genealogies. In spite of the dispute between the royals that employed them, the heralds still maintained a collegial working relationship. Terry continued granting arms to the members of the Irish diaspora until his death in 1725. After his death, the Irish abroad were obliged to apply to Ulster King of Arms for grants.

A collection of his pedigrees and papers has been published in bookform.

In 1678, Terry married Mary Stritch of Limerich, and had several children:[1]