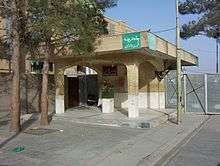 Jamkaran (Persian: Jamkarān‎‎; also Romanized as Jamkarān, Jamgarān, Jam-i-Karān, and Jam‘karān)[1] is a village in Qanavat Rural District, in the Central District of Qom County, Qom Province, Iran. At the 2006 census, its population was 8,368, in 1,747 families.[2]

Jamkaran is located on the outskirts of Qom, and is the site of the Jamkaran Mosque, a popular pilgrimage site for Shi'ite Muslims. Local belief has it that Muhammad al-Mahdi -- the Twelfth Imam, a messiah figure Shia believe will lead the world to an era of universal peace — once appeared and offered prayers at Jamkaran. On Tuesday evenings large crowds of thousands gather at Jamkaran to pray and to drop a note to the Imam in a well at the site, asking for help with some problem.[3]

Belief in Jamkarani has been compared to that of Catholics who believe that the Virgin Mary appeared to three shepherd children in Fatima, Portugal in 1917.[4]

The mosque, six kilometres east of Qom, has long been a sacred place, at least since 373 A.H., 17th of Ramadan (22 February 984 C.E.), when according to the mosque website, one Sheikh Hassan ibn Muthlih Jamkarani is reported to have met Muhammad al-Mahdi along with the prophet Al-Khidr. Jamkarani was instructed that the land they were on was "noble" and that the owner — Hasan bin Muslim — was to cease cultivating it and finance the building of a mosque on it from the earnings he had accumulated from farming the land.[5][6]

Sometime in decade of 1995-2005 the mosque's reputation spread, and many pilgrims, particularly young people, began to come to it. In the rear of the mosque there is a "well of requests" where it is believed the Twelfth Imam once "became miraculously unhidden for a brief shining moment of loving communion with his Creator." Pilgrims tie small strings in a knot around the grids covering the holy well, which they hope will be received by the Imam Mahdi. Every morning custodians cut off the strings from the previous day.[4]

Tuesday is especially popular as it is said to be "the day the vision appeared and therefore the day of the week that [the Imam], although invisible, takes requests." The gathering "resemble a huge tailgate party where vendors set up in the parking lots and families set up picnic rugs and tens of thousands wander about the grounds as if waiting for a main event to happen."[3] More than a hundred thousand pilgrims sometimes pray outside the overflowing mosque for Maghrib prayer. In keeping with separation of the sexes, women are separated from men in their own special cordoned-off area and also have their own well.[3] Also on Tuesdays, the mosque kitchen provides a free evening meal to thousands of poor people.[4] There is a significant body of Shia writing arguing that the Imam Mahdi is hidden but active in the world helping those who are needy.

One of the first acts of the government of President Mahmoud Ahmadinejad was to donate £10 million to the mosque, to fund plans to turn "the tiny Jamkaran mosque into a massive complex of prayer halls, minarets, car parks and ablutions."[7] In recent years, overseers of the Jamkaran compound have become sensitive to its foreign images and have restricted foreign press from the main mosque and well.[8]

This article is issued from Wikipedia - version of the 1/4/2016. The text is available under the Creative Commons Attribution/Share Alike but additional terms may apply for the media files.