The Japanese Wikipedia (ウィキペディア日本語版, Wikipedia Nihongo-ban, literally "Wikipedia: Japanese-language version") is the Japanese-language edition of Wikipedia, a free, open-content encyclopedia. Started on 11 May 2001,[1] the edition attained the 200,000 article mark in April 2006 and the 500,000 article mark in June 2008. As of December 2016, it has over 1,042,000 articles.[2] In April 2016, the project had 4,192 active editors who made at least five edits in that month, ranking fourth behind the English, Spanish and Russian editions.

In March 2001, three non-English editions of Wikipedia were created, namely, the German, the Catalan, and the Japanese Wikipedias.[3] The original site address of the Japanese Wikipedia was http://nihongo.wikipedia.com and all pages were written in the Latin alphabet or romaji, as the software did not work with Japanese characters at the time. The home page also showed an early attempt at creating a vertical text.[4]

The first article was named "Nihongo no Funimekusu". Until late December in that year, there were only two articles.

On January 31, 2003, a Japanese online magazine, Wired News Japanese edition, covered Wikipedia. After that, the number of participants started to increase considerably and many pages about the Wikipedia project were translated or created.

On February 12, 2003, the Japanese edition of Wikipedia reached the 1,000-page milestone, two years after the English edition. Given that accomplishment, Slashdot Japan posted a story about the Japanese Wikipedia. Several days after that, the number of participants doubled, attesting to the power of the Slashdot effect. Because of this exposure, a variety of articles started to appear, among them physics, biology, information technology, literature, music, games, manga, and celebrities.

The major force behind the expansion appeared to be a number of links at Yahoo! Japan News. It is unknown exactly when Yahoo! started to put links to the edition in their articles, but as of August 2004, dozens of news articles posted on Yahoo! Japan contained links to the edition to explain terms in the articles. Lately, the developers of Wikipedia have noticed that certain spikes in server usage correspond to the publishing of Yahoo! Japan news articles containing links to Wikipedia.

In September 2004, the Japanese Wikipedia was awarded the "2004 Web Creation Award Web-Person Special Prize"[5] from the Japan Advertisers Association.[6] This award, normally given to individuals for great contributions to the Web in Japanese, was accepted by a long-standing contributor on behalf of the project.

The Japanese Wikipedia is different from this English Wikipedia in a number of ways. 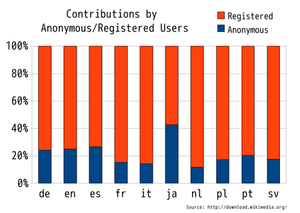 The Japanese Wikipedia has the most anonymous contributions as compared to other major languages in Wikipedia.[9]

Nobuo Ikeda, a known public policy academic and media critic in Japan, has suggested an ongoing 2channel-ization phenomenon on the Japanese Wikipedia. Ikeda argues that by allowing anonymous IP users, the community spawns a type of culture seen in the likes of anonymous message boards such as 2channel,[22] where hate speech, personal attacks and derogatory expressions are common, and also the source of entertainment.[23] He also remarks on the "emotional-outlet"/"get rid of stress" aspect of Japanese internet culture where 90% of blogs are anonymous, compared to the U.S. where 80% of blogs are expressed under one's own name. Ikeda's arguments are not the only sources hinting cultural correlation, influence, overlapping users from 2channel.[24][25]

In 2006 Kizu Naoko (木津 尚子), a Japanese Wikipedian, stated that on the Japanese Wikipedia most users start out as page editors and uploaders of images, and that the majority of people continue to serve in those roles. Some people apply to become administrators. Kizu said "Unfortunately, some apply for this role out of a desire for power! And then are surprised when they get rejected. (This is a kind of ‘regressive career path’—from an immature editor to a banned one!)"[26]