Cropsey was born on his father Jacob Rezeau Cropsey's farm in Rossville on Staten Island, New York, the oldest of eight children. As a young boy, Cropsey had recurring periods of poor health. While absent from school, Cropsey taught himself to draw. His early drawings included architectural sketches and landscapes drawn on notepads and in the margins of his schoolbooks.

Trained as an architect, he set up his own office in 1843. Cropsey studied watercolor and life drawing at the National Academy of Design under the instruction of Edward Maury and first exhibited there in 1844. A year later he was elected an associate member and turned exclusively to landscape painting; shortly after he was featured in an exhibition entitled "Italian Compositions".

Cropsey married Maria Cooley in May 1847, traveled in Europe from 1847–1849, visiting England, France, Switzerland, and Italy. He was elected a full member of the Academy in 1851. Cropsey was a personal friend of Henry Tappan, the president of the University of Michigan from 1852 to 1863. At Tappan's invitation, he traveled to Ann Arbor in 1855 and produced two paintings, one of the Detroit Observatory, and a landscape of the campus.[1] He went abroad again in 1855, and resided seven years in London, sending his pictures to the Royal Academy and to the International exhibition of 1862. 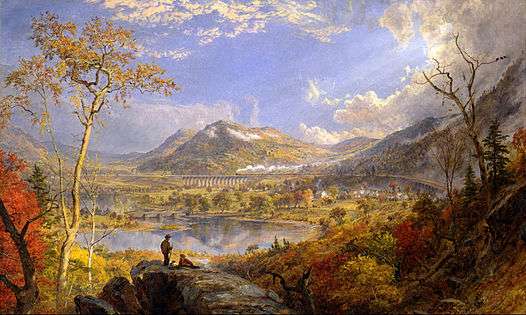 Returning home, he opened a studio in New York and specialized in autumnal landscape paintings of the northeastern United States, often idealized and with vivid colors. Cropsey co-founded, with ten fellow artists, the American Society of Painters in Water Colors in 1866. In 1869 Cropsey built a 29-room Gothic Revival mansion and studio in Warwick, New York that he named Aladdin. As well as living in New York City, he spent part of his time in Warwick until the mansion was sold in 1884. In 1885 he removed to Hastings-on-Hudson, New York.

Cropsey's home and studio, Ever Rest, in Hastings-on-Hudson, New York as well as the largest permanent collection of Cropsey's work are open for tours by the Newington-Cropsey Foundation. 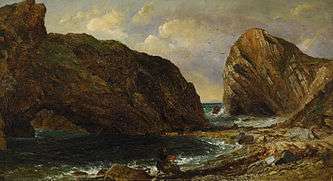 Cropsey's interest in architecture continued throughout his life and was a strong influence in his painting, most evident in his precise arrangement and outline of forms. But Cropsey was best known for his lavish use of color and, as a first-generation member from the Hudson River School, painted autumn landscapes that startled viewers with their boldness and brilliance. As an artist, he believed landscapes were the highest art form and that nature was a direct manifestation of God. He also felt a patriotic affiliation with nature and saw his paintings as depicting the rugged and unspoiled qualities of America. 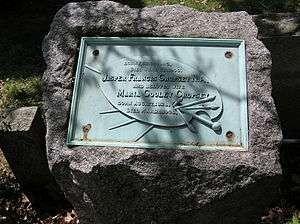 The monument of Jasper Francis Cropsey in Sleepy Hollow Cemetery