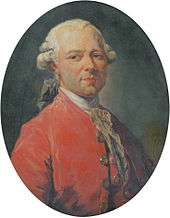 Jean-Pierre-Louis-Laurent Houël (28 June 1735 – 14 November 1813) was a French painter, engraver and draftsman. During his long life Houël witnessed the reign of Louis XV, the French Revolution, and the period of Napoleon's First Empire.

He was born at Rouen into a family of prosperous artisans, who sent him to the city's drawing academy when he was fifteen.

Here he was exposed to the art of early Dutch and Flemish painters, which was to have a defining impact on his chosen specialty of landscape painting. In 1758 Houël published a book of landscape engravings, and in 1768 he painted six views of the Duc de Choiseul's property. The following year his influential patrons secured a place for him at the French Academy in Rome. Here, captivated with Italian customs, landscapes, and ancient sites, he traveled throughout southern Italy, making gouache drawings that were extolled at Paris Salons of the early 1770s.

He spent the years 1776 to 1779 traveling in Sicily, Lipari, and Malta, after which he published numerous lavishly illustrated travel books based on his journey. Houël's main intention was to illustrate local topography, but his delicate applications of watercolor also magnificently captured the effects of light and atmosphere. In his later years Houël published two illustrated treatises on elephants. Drawings of other animals suggest he was preparing to publish further zoological works; however, his death at the age of seventy-eight cut short his plans.