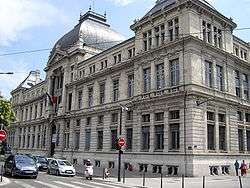 Jean Moulin University Lyon III (Université Jean Moulin Lyon III) is a French public university, based in Lyon. It is under the supervision of the Academy of Lyon. A total of 22,500 students study there for a two-to-eight-year degree.

University Lyon-III was established in the early 1970s (July 26, 1973), a division of teachers following the events of May 68 that rocked the academic world. There are also departments of geography-planning, the engineer of the countryside in Annecy and history, and a faculty of philosophy with more than 90 doctoral students. All three public universities in Lyon (Lyon I, Lyon II, Lyon III) are derivative of the former University of Lyon established in 1896.

The university has steadily expanded its international relations and has relations with universities in various countries.

Because of the politically extreme right tendencies of some of its lecturers, the university has been accused in the 1980s and 1990s to be complacent with regard to theses deniers, anti-Semitic and racist. The Report on racism and Holocaust denial at the University Jean Moulin-Lyon III, prepared under the direction of Henry Rousso at the request of the Minister of Education and released in October 2004, showed that the number of teachers involved was limited.

The university is located on three different campuses: the first one, called "Les Quais", is by the Rhône (river), the second, called "Manufacture des Tabacs" in the SE part of Lyon, and the last one in Bourg-en-Bresse (Ain department).

The Faculty of Law of Lyon celebrates 130 years with its rival, the University Lyon-II. Largest center for law students from the city of Lyon, it has all the legal training of the first year Degree tray until 8 (or more). It is renowned especially for research of history of law and family law and for the Master 2 business and financial engineering ranked 6th among the best master's degrees in business law and finance by SMBG. The Faculty of law also proposes the preparation of master 2 business law and taxation coupled with the degree of legal council (DJCE). Under the near Lyon, the Law School of Lyon-III is a member of the graduate school creates common at the beginning of 2007-2008 between the University of Lyon-II, III and Lyon-Saint-Étienne.

The Faculty of Languages of Lyon-III includes studies in foreign languages and civilizations (the LCE), learning of foreign literature, civilization, history of language, his system.

There is also the opportunity to study applied foreign languages.

The Faculty of Arts and Civilizations of Lyon competition and works in concert with the University Lyon-II and the "École Normale Supérieure Lettres et Sciences Humaines" de Lyon.

In support of the Education (CAPES, CAFEP and aggregates), students of the Faculty get more than 70% success rate.

The Faculty of Philosophy of Lyon-III offers a specialization in aesthetics (DEA study systems - reference architecture and urban), a postgraduate museology and new media and in ethics (philosophy of life).

The IAE, standing for Institut d'Administration des Entreprises (Institute of Business Administration), is the school of business of the Jean Moulin University Lyon3. Also known as the IAE of Lyon, its main campus is located in the historical complex of the “Manufacture des Tabacs” in the heart of Lyon, France.

In addition to the 144 full-time professors at the IAE, 400 executives from private, external companies contribute to the education.

The IAE of Lyon is one of the top French universities for research and training in management. The school is highly internationalized and has an alumni network of 30,000 former students throughout the world.

(*prior the division of the University of Lyon).

(*prior the division of the University of Lyon).

The biggest school in terms of number of students is the Business School (IAE) with 35% of the students. Then comes the School of Law (26%), the School of Foreign Languages (16%) and the School of Literature (13%). Other students attend the School of Philosophy, or programs such as professional short-term degrees. [2005 figures]