Jegichagi is a Korean traditional outdoor game. It requires the use of people's foot and Jegi, an object used to play jegichagi. Jegi looks like a badminton shuttlecock, which is made of a small coin (quarter size), paper, or cloth. In Korea, children usually play alone or with friends in winter seasons, especially on Lunar New Year. Briefly explaining the rules, the player kicks a jegi up in the air and keeps on kicking to prevent from falling to the ground. In a one-to-one game, a player with the most number of consecutive kicks wins. In a group game, the players stand in a circle, and take turns kicking the Jegi. Players who fail to kick the Jegi upon receiving it and let it drop to the ground lose. As a penalty, the loser tosses the jegi at the winner so that he can kick it as he wishes. When the loser catches the jegi back with his hands, the penalty ends and he can rejoin the game.[1] This has developed, and people combined two or three materials and made new ways of playing jegichagi. Though Jegichagi used to be a game mostly played in winter, it has become a year-round game.

Although there is no written record about the origin of Jegichagi, historical legends states that the game was developed from young martial artists’ training which involved kicking a small leather pouche. Jegichagi has been developed in a different way.[2]

Samguk Yusa, a collection of Korean historical legends, states that Goguryeo people was good at Cuju, which was eventually developed to be jegichagi in Korea. Also, it says that Kim Yushin of Silla stepped on and tore off Kim Chunchu's otgoreum, two long ribbon ties in Korean traditional costume, under the mask of playing jegichagi and had his sister sew it back on. Through that event, Kim Yushin's sister eventually married and became wife of Kim Chunchu, later Muyeol of Silla.[3] 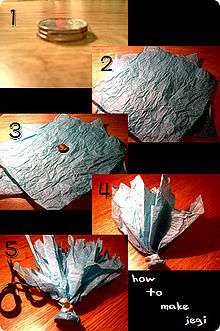 Things to prepare: 1 Korean traditional paper (Hanji), 1 Coin with a hole in the middle(Yeopjeon)

Rules and Kinds of Jegichagi

Players kick the jegi (paper shuttlecock) into the air using instep of the foot. The winner of the game is the player who kicks jegi the most times without letting it fall.

1. Hullangyi(헐랭이): Use of the inner side of the foot to kick 'jegi' while the other foot balances the body. The foot used to kick jegi should remain in air without touching the ground.

2. Ddangganghji(땅강아지): Similar to #1; however, the foot kicking jegi touches the ground each time before kicking again.

3. Left-right foot(우지좌지): Similar to #2, but both feet are used to kick Jegi alternatively with either the inner surface of both feet (or one inner and the other outer)

4. Appchagi(앞차기): Use of the top of the foot to kick jegi.

5. Ditbalchagi(뒷발차기): Use of the top lateral side of the foot to kick jegi.

6. Kigeegi(키지기): Each lift of Jegi must be higher than one's own height.

7. Mulgeegi(물지기): Continuously kicking jegi and catching it with your mouth.

How to Select Jegi and Practice

What is a good Jegi?

The most important factor of good Jegi is its weight. If it is too light, it is very hard to control Jegi since it falls to the ground before the next kick is ready. However, if it is too heavy, it is hard to kick the jegi high enough. Thus, a good Jegi should be the one of proper weight. (About 10g)

Because it is difficult to do Jegichagi at a first try, it is very helpful to use a tied Jegi. Simply you tie one end of the string to a jegi and the other end to somewhere high enough to hold the jegi in the air. In this way, you can continue hitting it without having to pick up the jegi every time it falls to the ground. Even if you do not kick it properly, the Jegi will always come back to a good position.

Practice while holding your pants.

Beginners have a habit of placing the arm towards the front while kicking Jegi with the thought that the arm helps balancing the body. However, it does not. Thus, if you are using the right foot to kick jegi, it is better for your right hand to hold the right side of your pants when doing Jegichagi.

The fact that Jegichagi uses muscles you rarely use stimulates the brain coordinated to those rarely used parts. Especially, the movement of right and left side of the body equally uses the right and left brain.

In 2000, Korean Jegichagi Association was founded to make new rules in order to fit this traditional game well into today’s generation. Although Jegichagi is well known as many of other famous traditional games in Korea, the game is losing its popularity. In effort to keep traditional Jegichagi alive within children’s mind, the Board of Education in South Korea ordered Jegichagi as one of the required activities in physical education courses in school, usually 3rd or 4th grade.

In August 2011, an American company released a children's toy called Kikbo based on the Jegichagi.[5]