Luken was a local leader of the Milk Driver's Union, a subsidiary of the Teamsters. Luken was one of the few Teamsters who stood up to the corrupt leadership of Teamsters President Jimmy Hoffa. Luken withdrew the dairy workers from the Teamsters Union and testified against Hoffa before the United States Senate.

Luken served in the Ohio House of Representatives and on the Cincinnati city council before becoming mayor.

Luken's brother and nephew, Tom Luken and Charlie Luken, both served as U.S. representatives and mayors of Cincinnati. 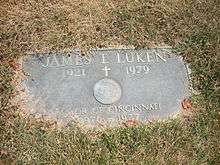