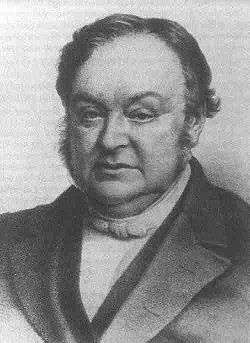 Johann Blumhardt is best known for his contribution in thought towards a kingdom-now or kingdom-come theology and his motto and centralization of Christianity around the idea that "Jesus is Victor." This phrase (aside from its Latin origin, Christus Victor) originated from the exorcism of Gottliebin Dittus that took place in Möttlingen in 1842. He wrote a book concerning the two-year-long possession of the girl and published it in the year 1850, entitled as Blumhardt's Battle. According to the writing the possessor was a widow who had killed two children and buried them in a field as well as a number of demons and the possesseds name was given as "G.".

It is said that the demonic manifestation ended one night with the demon shouting "Jesus is the victor". Blumhardt is remembered as something of a hero in that respect. He, on the other hand, would always point to Christ as the hero and repeat his famous quote: "That I don´t know, but this I do know; Jesus is the victor".

This event lead to a massive revival in Blumhardt's parish. It was claimed there were many healings, conversions of some of the church’s most determined opponents, and radical transformations of life and character. Marriages were said to be saved and enemies reconciled amidst an outpouring of evangelistic zeal. Blumhardt's life after the exorcism was characterized by revivals and faith healings. In 1853 he purchased a thermal spa in Bad Boll to serve as a Christian retreat, where people came to seek his renowned healing abilities. He lived and worked there until his death in 1880.

Both Johann and his son Christoph, while unsystematic, generated enormous pastoral and theological waves. Their ideas on the perennial breaking-in of God's kingdom from the future helped transform Christian eschatology in the twentieth century. They were particularly influential on the work of Karl Barth and Eduard Thurneysen.