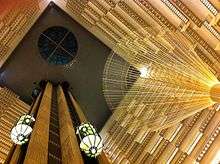 Looking up into atrium of the Hyatt Regency Atlanta, first of Portman's atrium hotels 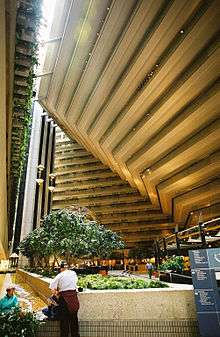 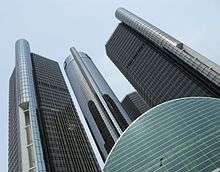 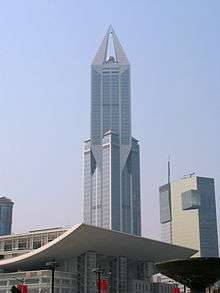 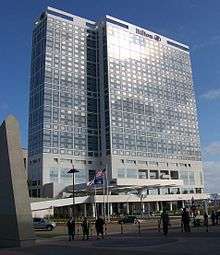 Portman graduated from the Georgia Institute of Technology in 1950. His firm completed the Merchandise Mart (now AmericasMart) in downtown Atlanta in 1961. The multi-block Peachtree Center was begun in 1965 and would expand to become the main center of hotel and office space in Downtown Atlanta, taking over from the Five Points area just to the south. Portman would develop a similar multiblock complex at San Francisco's Embarcadero Center (1970s), which unlike its Atlanta counterpart, heavily emphasized pedestrian activity at street level.

The Hyatt Regency Atlanta, Portman's first atrium hotel, would lead to many more iconic hotels and multi-use complexes with atria, including the Westin Bonaventure Hotel in Los Angeles (1974–1976), the New York Marriott Marquis (1982–1985), and the Renaissance Center in Detroit (first phase 1973-1977), whose central tower remained the tallest hotel in the Western Hemisphere until the completion of 1717 Broadway in 2013.

The Shanghai Centre (1990) was the first of many major projects in China and elsewhere in Asia.

Portman's work was featured in a major exhibition at Atlanta's High Museum of Art in 2009.

Portman is a Fellow of the American Institute of Architects.

Portman is praised for his "cinematic"[2] interiors artfully relating interior space and elements to the individual. In the 1960s and 1970s the placement of such buildings in America's decaying downtowns was considered salvation of the city centers, but contemporary city planning is highly critical of such insular environments that "turn their back" on the city streets.[3] For example, the New York Marriott Marquis with its 8th-floor lobby once praised as a "town square", is now criticized for turning its back to Times Square — but at the time the hotel was built, due to the still-seedy character of Times Square, Portman's style of inwardly-oriented spaces made logical sense.[4]

An asterisk (*) following a listing indicates a work done in partnership with H. Griffith Edwards.