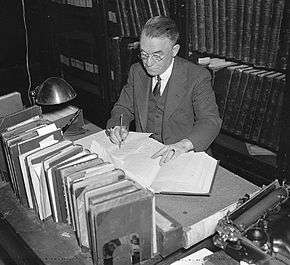 John Clement Fitzpatrick (August 10, 1876 – February 10, 1940) was an archivist and an early American historian, widely regarded as an authority on George Washington. He was noted for his groundbreaking work editing Washington's diaries and many letters and documents. Appointed by the George Washington Bicentennial Commission he prevailed over the editorship in the acclaimed 39 volume work, The Writings of George Washington, published between 1931 and 1944. His involvement during this prolonged effort set many of the standards for the management of manuscripts in the Library of Congress. Fitzpatrick died before all the volumes had been published. He belonged to a number of historical societies while also earning honorary degrees from several prominent universities. Fitzpatrick's years of correspondence and other records have provided historians and with another valuable source of information on the life of and events surrounding George Washington, and on the history of Washington D.C. for that era.

Fitzpatrick was born in Washington, D.C. His father was James Nicholas Fitzpatrick who worked as a financial clerk for the U.S. Senate. His mother was Elizabeth Ann Combs. He graduated from Washington High School in 1894 and thereafter worked for three years as a journalist for the U.S. Government Daily Advertiser. He married Elizabeth V. Kelly, later in life in 1922, their marriage producing one daughter, Elizabeth Fitzpatrick Gerrety, born in 1926. Fitzpatrick's wife died in 1933. Elizabeth inherited the Fitzpatrick estate including many of his letters and other writings, which she gave to the Library of Congress.[2][3][4]

Before beginning his academic and historical career, Fitzpatrick worked as an auditor for the United States Senate and later for the Treasury Department.[4] In 1897 he began working at the Library of Congress[3] and was soon appointed by its Librarian John Russell Young, as an entry technician, the same year the Library of Congress created its Manuscripts Division. In 1902 he became the assistant chief of the division which grew under his direction to include one the greatest collections of source materials in the world. He had always recognized the importance of establishing the national archives department, serving for a while on the commission to evaluate its role and importance in the academic world.[2]

Fitzpatrick was given the task of calendaring (an arduous process of indexing manuscripts) the George Washington papers. He finally completed the project in 1909. During this time he assumed greater responsibility for the Manuscripts Division. In 1908 Fitzpatrick was appointed the chief clerk, which placed him in charge of its administrative duties.

In 1918, still with his tenure at the Library, he edited The Autobiography of Martin Van Buren which he published in 1920.[3] He also edited and published the documentary journals of the Continental Congress along, George Washington’s diaries and in 1921 wrote, Notes on the care, cataloguing, calendaring and arranging of manuscripts, published by the Library of Congress.[5] He remained chief clerk until his departure in 1928 to preside over the George Washington Bicentennial Commission, founded by Congress to celebrate the coming 200th anniversary in 1932 of George Washington's birth in 1731. His resignation was also prompted by being passed over to become chief of the newly formed Manuscripts Division in favor of historian John Franklin Jameson.[6] Among the Commission's projects was the publication of the monumental Writings of Washington, which was compiled and edited over a twelve-year period by Fitzpatrick. Under his direction the commission conducted a thorough investigation of all available books, pamphlets, reports, and other material relating to the life and times of George Washington. Due to the wide ranging field associated with Washington the commission was required to examine the requirements they would follow in the selection of material, while also making sure they didn't exclude any essential data.[7] After being transcribed to print, edited and printed the individual volumes would in turn be published over a twelve-year period under the authority of Congress and the George Washington Bicentennial Commission.[8] While working on the Washington's writings project Fitzpatrick was invited to speak about his involvement at a special meeting and celebration sponsored by the George Washington Bicentennial Commission on May 7, 1932.[9]

Fitzpatrick was awarded honorary degrees from Saint Mary's College, George Washington University, and Washington and Lee University.[2][3][4] His scholarly pursuits primarily involved the American Revolution, and ventured outside this realm only once to edit and publish the Autobiography of Martin Van Buren. History being his primary interest Fitzpatrick was a prominent member of the New York Historical Society, the American Irish Historical Society, and the American Academy of Political and Social Science. He was known to have a few ardent interests besides history, which included art and religion and he belonged to the American Artists Professional League. He was also president of the American Catholic Historical Society from 1928–1929,[3] and a member of L'Institut Français de Washington, In 1928 he was accepted into the American Antiquarian Society, however he could rarely be persuaded to leave his work in Washington to participate in their meetings.[2]

Fitzpatrick died at the relatively young age of 63 on February 10, 1940, while editing the 29th volume (of a 39-volume work) of The Writings of George Washington, taken from Washington's original manuscripts, letters, records and journals. Publishing the numerous individual volumes took several years. When Fitzpatrick died only twenty six of the volumes had been published while the remaining volumes were still in page proof and not yet ready for publication.[4][10] Fitzpatrick is buried at the Congressional Cemetery in Washington DC.[11]

The papers of John Clement Fitzpatrick range from 1927 to 1941: They consist of general correspondence with a wide range of people, including New York Congressman Sol Bloom, director of the United States George Washington Bicentennial Commission,[12] and lend themselves to a variety of Washington related topics. The bulk of his correspondence is dated between 1927 and 1941 and primarily relate to Fitzpatrick's undertakings while editor of his widely acclaimed, The Writings of George Washington from the Original Manuscript Sources, 1745–1799, prepared under the direction of the George Washington Bicentennial Commission. They include letters concerning the locations of original Washington documents which were to be published in his forthcoming 39-volume work, along with correspondence with the Government Printing Office relating to their printing. In 1932, the bicentennial of Washington's birth, interest in Washington's life was greatly renewed, prompting thousands of letters of inquiry into virtually every aspect of Washington's personal and professional life. Fitzpatrick's replies to these wide-ranging questions are a valuable source of information on Washington. His letters of reply provided information on Washington's appearance and his dental problems along with valuable information regarding Washington's birthday, birthplace, life mask, death, burial and grave sites[lower-alpha 1], and provided information to inquiries about his education along with Washington's ideas about education, his library, service sword, bookplate, the family coat of arms and the genealogy of the Washington family.[13] Fitzpatrick's papers were given to the Library of Congress shortly after his death by his sister, Katherine F. Rodgers, in 1940. Some of the papers were transferred from the Library of Congress Archives to the Manuscript Division in 1988.[14] The Fitzpatrick Papers were arranged into five separate categories: The John C. Fitzpatrick Series, the 'Fitzpatrick and Combs Families Series', the 'Elizabeth F. Gerrety Series', a 'Photographs Series', along with the 'Oversized Series'. The series contains information covering the Fitzpatrick and Combs families offering historical insights to anyone with an interest in the history of Washington D.C. for the time period.[4] Fitzpatrick was affectionately referred to by the Library of Congress staff as "Uncle Sam's authority on Washingtonia."[1]

The writings of George Washington

The diaries of Washington