For other people with the same name, see John Gill (disambiguation). 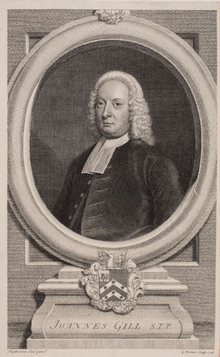 John Gill (23 November 1697 – 14 October 1771) was an English Baptist pastor, biblical scholar, and theologian who held to a firm Calvinistic soteriology. Born in Kettering, Northamptonshire, he attended Kettering Grammar School where he mastered the Latin classics and learned Greek by age 11. He continued self-study in everything from logic to Hebrew, his love for the latter remaining throughout his life.

At the age of about 12, Gill heard a sermon from his pastor, William Wallis, on the text, "And the LORD God called unto Adam, and said unto him, Where art thou?" (Genesis 3:9). The message stayed with Gill and eventually led to his conversion. It was not until seven years later that he made a public profession when he was 18.

His first pastoral work was as an intern assisting John Davis at Higham Ferrers in 1718 at age 21. He became pastor at the Strict Baptist church at Goat Yard Chapel, Horsleydown, Southwark in 1719. His pastorate lasted 51 years. In 1757 his congregation needed larger premises and moved to a Carter Lane, St. Olave’s Street, Southwark. This Baptist church was once pastored by Benjamin Keach and would later become the New Park Street Chapel and then the Metropolitan Tabernacle pastored by Charles Spurgeon.

During Gill's ministry the church strongly supported the preaching of George Whitefield at nearby Kennington Common.

In 1748, Gill was awarded the honorary degree of Doctor of Divinity by the University of Aberdeen. He was a profound scholar and a prolific author. His most important works are: