Born in 1906 in Sheridan, Wyoming, Pyle was the first governor of Arizona to be born in the 20th century and was the Program Director of KFAD (now KTAR) Radio in Phoenix from 1930 to 1951. He also served as a war correspondent during World War II and covered the surrender ceremony of the Japanese. Pyle defeated pioneering female politician Ana Frohmiller in his 1950 campaign for governor. He served as Governor of Arizona from 1951 to 1955.[1]

In 1953, he attempted to break up a polygamous fundamentalist Mormon compound in Colorado City, Arizona, in what became known as the Short Creek Raid, which resulted in two dozen men arrested and 236 children placed in foster homes. This move alienated many voters in the state after photographs of tearful children being forcibly removed from their distraught mothers appeared in the newspapers. Pyle subsequently lost his 1954 re-election bid to former Democratic Senator Ernest McFarland.

Pyle was an aide to President Dwight D. Eisenhower in the late 1950s.[3] 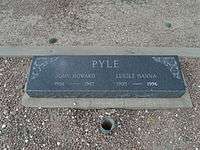 Pyle died on November 29, 1987 in Tempe, Arizona, and is buried there in the Double Butte Cemetery.[4]

This article is issued from Wikipedia - version of the 2/23/2016. The text is available under the Creative Commons Attribution/Share Alike but additional terms may apply for the media files.