Captain John Mason (1586–1635) was a sailor and colonizer born at King's Lynn, Norfolk, England, and educated at Peterhouse College, Cambridge.[1] He was appointed the second Proprietary Governor of Newfoundland's Cuper's Cove colony in 1615, succeeding John Guy. Mason arrived on the island in 1616 and explored much of the territory. He compiled a map of the island and wrote and published a short tract (or "Discourse") of his findings.

Mason drew up the first known English map of the island of Newfoundland. Published in William Vaughan's Cambrensium Caroleia in 1625, the map included previously established placenames as well as new ones such as Bristol's Hope and Butter Pots, near Renews. His tract entitled A Briefe Discourse of the New-Found-Land with the situation, temperature, and commodities thereof, inciting our nation to go forward in the hopefull plantation begunne, was published in 1620 by Mason while in England. 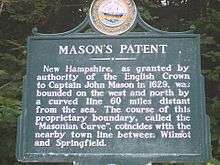 The New Hampshire historical marker for Mason's Patent and named after John Mason.

In 1620 King James I's Privy Council issued Mason a commission and provided him with a ship to suppress piracy in Newfoundland. Mason ceased to be Cuper's Cove governor in 1621 and apparently he was not replaced, although the settlement continued to be occupied throughout the seventeenth century.

Upon returning to England, Mason consulted with Sir William Alexander about possibly colonizing Nova Scotia. In 1622, Mason and Sir Ferdinando Gorges received a patent from the Council for New England for all the territory lying between the Merrimack and Kennebec rivers.[2] In 1629 they divided the grant along the Piscataqua River, with Mason receiving the southern portion.[2] The colony was recharted as the Province of New Hampshire. It included most of the southeastern part of the current state of New Hampshire, as well as portions of present-day Massachusetts north of the Merrimack.

Although Mason never set foot in New England, he was appointed first vice-admiral of New England in 1635. He died that same year while preparing for his first voyage to the new colony.