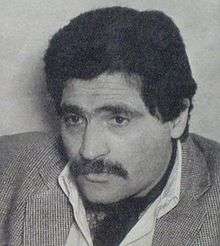 Asís was born in Avellaneda, a working/middle-class suburb of Buenos Aires, to a family of Syrian immigrants. From his youth he was drawn to literature and political activism.

Among his first major books is Los reventados ("The down-and-out"), a novella about sundry characters seeking to make easy money in the context of Juan Perón's return to Argentina in 1973. Some characters witness the 20 June 1973 Ezeiza massacre, which is narrated from their point of view.

During the 1970s, Asís (using the nom de plume Oberdán Rocamora) published a daily column in the daily Clarín, in the tradition of Roberto Arlt. In 1978, he reported (as Rocamora) from the South American rally where he ran as co-pilot of a stock Citroen car.

Asís rose to fame in 1980 with Flores robadas en los jardines de Quilmes (Flowers stolen in the gardens of Quilmes), where he relates the adventures of several young people experimenting with sex, careers, and politics in 1970s Argentina, centered around the narrator's relationship with a young woman from Quilmes, who eventually decides to leave the country. The book was dedicated to Haroldo Conti, who was already a "desaparecido" at the time, and included bolder than accepted political statements in the era of the military junta's dictatorship. That book became the first part of a trilogy named Canguros (lit. "Kangaroos") that dealt with everyday life in Greater Buenos Aires, sometimes from a lumpenproletariat perspective.

In 1984, Asís released Diario de la Argentina ("Argentina's Newspaper"), a roman à clef about his days in Clarín. Major newspapers were not thrilled[1] to have their inner conflicts aired in public, and (informally) boycotted Asís and his work for several years.

During the 1980s, Asís became more involved in politics. He regularly attended meetings with intelligence operatives, which became the basis for the 1987 novel Partes de inteligencia ("Intelligence Reports"). During Raúl Alfonsín's presidency, Asís gravitated towards the Justicialist Party, and specifically supported presidential candidate Carlos Menem. When Menem became President of Argentina in 1989, Asís was appointed to several government and diplomatic posts, including ambassador to UNESCO, Secretary of Culture, and ambassador to Portugal.

After Menem's ten years as president, Asís remained in politics, and became a sought-after commentator in print, radio and TV, where his rich language and his flamboyancy set him apart from the more formal tone of most politicians. In the 2007 presidential election, Asís ran for vice president sharing a ticket with Jorge Sobisch, a former governor of Neuquén province. The ticket attained approximately 1.6% of the national vote, finishing in sixth place.

The social realism of his earlier works was seen by some critics as "collaborationism" with the dictatorship, owing to the success of Flores robadas en los jardines de Quilmes during the regime.[2] His style has been judged to resemble the nineteenth-century realistic novel.[3]