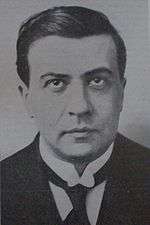 Born in Buenos Aires, the son of José P. Murature and Dolores Legarrete, he was educated at the Colegio Nacional de Buenos Aires and the University of Buenos Aires. Murature was awarded the degree of Doctor of Laws in 1898. He was later a member of the staff of La Nación newspaper in Buenos Aires, rising to Managing Editor.