Dupleix was born in Landrecies, France. His father, François Dupleix, a wealthy fermier général, wished to bring him up as a merchant, and, in order to distract him from his taste for science, sent him on a voyage to India in 1715 on one of the French East India Company's vessels. He made several voyages to the Americas and India, and in 1720 was named a member of the superior council at Pondichéry. He displayed great business aptitude, and, in addition to his official duties, made large ventures on his own account, and acquired a fortune. In 1730 he was made superintendent of French affairs in Chandernagore, the town prospered under his administration and grew into great importance. In 1741, he married Jeanne Albert, widow of one of the councillors of the company; Albert was known to the Hindus as Joanna Begum and proved of great help to her husband in his negotiations with the native princes.

His reputation procured him in 1742 the appointment of governor general of all French establishments in India. He succeeded Dumas as the French governor of Pondichéry. His ambition now was to acquire for France vast territories in India, and for this purpose he entered into relations with the native princes, and adopted a style of oriental splendour in his dress and surroundings. He built an army of native troops, called sepoys, who were trained as infantrymen men in his service also included the famous Hyder Ali of Mysore. The British took the alarm. But the danger to their settlements and power was partly averted by the bitter mutual jealousy which existed between Dupleix and Bertrand François Mahé de La Bourdonnais, French governor of the Isle of Bourbon (today's La Réunion).

Dupleix meeting the Subadar of the Deccan, Murzapha Jung

When the city of Madras capitulated to the French following the Battle of Madras in 1746, Dupleix opposed the restoration of the town to the British, thus violating the treaty signed by La Bourdonnais. He then sent an expedition against Fort St David (1747), which was defeated on its march by the Nawab of Arcot, ally of the British. Dupleix succeeded in winning over the Nawab, and again attempted the capture of Fort St David, but did not succeed. A midnight attack on Cuddalore was repulsed at a great loss to Dupleix.

In 1748 Pondicherry was besieged by the British, but in the course of the operations news arrived of the peace concluded between the French and the British at Aix-la-Chapelle. Dupleix next entered into negotiations whose object was the subjugation of southern India. He sent a large body of troops to the aid of the two claimants of the sovereignty of the Carnatic and the Deccan. The British sided with their rivals to check the designs of Dupleix.

In 1750 the Subadar of Deccan gifted the Alamparai Fort to the French. This was a token of his appreciation of the services of Dupleix and the French forces to his services. The fort was later captured by the British and destroyed.

From 1751, Dupleix tried to expand French influence in Burma by sending the envoy Sieur de Bruno, and helping militarily the Hmongs in their conflict with the Burmese.[1]

The conflicts between the French and the British in India continued till 1754, when the French government, anxious to settle peace, sent a special commissioner to India with orders to supersede Dupleix and, if necessary, to arrest him. Dupleix was compelled to embark for France on 12 October 1754.

Having invested his private fortune in the implementation of his public policies, Dupleix found himself ruined. The government refused to support him, and he died in obscurity and want on 10 November 1763. 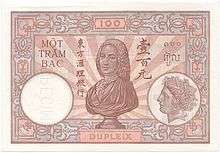 A number of things were named in his honour: 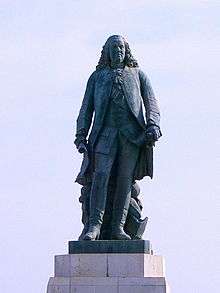 Statue of Dupleix in Puducherry

Dupleix left Puducherry in 1754, French recognition of his contribution came only in 1870, with the commissioning of two statues-one in Puducherry and the other in France. It is now situated in Goubert Avenue at the end of Rock Beach. It was first installed on 16 July 1870. In 1979 the statue was moved from its previous location to the current location at the beach.

Dupleix is represented as a man of commanding stature. In the large nose and massive under jaw, some resemblance may be traced to Oliver Oromwel as commonly represented in his portraits. In the statue, Dupleix wears a Curt dress with bag wig and long riding boots; In his right hand is a plan of Puducherry, his left reposing on the hilt of his sword.[2]

Restoration of the Dupleix statue was undertaken by the Public Works Department (PWD) of the government of Puducherry in 2014.[3]