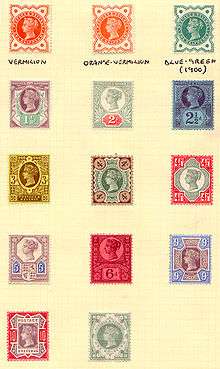 A complete set of Jubilees. 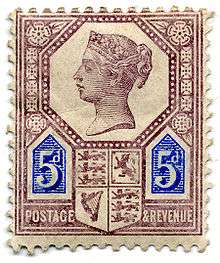 The 5-pence value includes emblems of the different nations of the UK.

The postage stamps of the United Kingdom issued in 1887 are known as the "Jubilee" issue because they were issued during the year of the Golden Jubilee of the accession of Queen Victoria to the throne in 1837. They continued in use throughout the remainder of Victoria's reign, and many of the designs were reused in the stamps of Edward VII. They include the first British stamps to be printed in two colours.

The variety of colours and designs was partly in response to the much-disliked "Lilac and Green" issues of 1883-1884. The 1884 Stamp Committee was formed to make decisions about improved replacements. After several meetings, and considering a number of essays by De La Rue (many of which survive in the marketplace), they produced a report recommending the use of surface printing, two colours in fugitive inks, coloured paper, and the dropping of the corner letters that had distinguished stamps on the sheet.

Because of the lengthy period of use, the lower values of the issue are still quite common today and used copies are worth only a few pennies. Higher values generally rise in price according to the denomination, topped by an unused 1-shilling value, at about 100 pounds. Double impressions of the halfpenny vermilion are known, and go for several thousand pounds.

This article is issued from Wikipedia - version of the 7/9/2015. The text is available under the Creative Commons Attribution/Share Alike but additional terms may apply for the media files.