Julio José Frenk Mora (born December 20, 1953) is a Mexican physician and former secretary of Health of Mexico. Frenk is currently the president of the University of Miami. He is the University of Miami's first Hispanic and natively Spanish-speaking president. Frenk formerly served as dean of the faculty and T & G Angelopoulos professor of public health and international development at the Harvard School of Public Health, from 2009-2015, where he had been the university's first Hispanic and natively Spanish-speaking dean.

Frenk was born in Mexico City, Mexico, on December 20, 1953. His father and grandfather, a Jew who fled to Mexico from Nazi Germany, were both physicians.[1][2] He received his medical degree, in 1979, from the National Autonomous University of Mexico (UNAM) and went on to obtain three additional advanced degrees: a Master of Public Health (1981), a Master of Arts in sociology (1982), and a joint Doctor of Philosophy in medical care organization and in sociology (1983), from the University of Michigan. 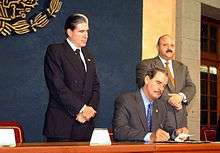 Secretary Frenk with President Vicente Fox and Reyes Tamez, Secretary of Education, in Los Pinos during the initialing ceremony of the National Institute of Genomic Medicine.

His professional career began in 1984, when Frenk assumed the position of founding director of the Centre of Public Health Research, Ministry of Health of Mexico, a role he held until 1987. Following that appointment, he went on to serve as the founding director-general of the National Institute of Public Health of Mexico, from 1987 to 1992. From 1995 to 1998, he served as the executive vice president of the Mexican Health Foundation, a private non-profit organization, and the director of its Centre for Health and the Economy. In 1998, he was designated executive director of evidence and information for policy at the World Health Organization (WHO), in Geneva, Switzerland.

Following the election of Vicente Fox in Mexico's 2000 presidential election, Frenk was appointed minister of health of Mexico, a position he held until December 2006.

Following his service as minister of health, Frenk was tapped to serve as senior fellow in the global health program of the Bill & Melinda Gates Foundation where he counseled the foundation on global health issues and strategies.

In addition to his many executive positions, Frenk has served in several academic roles including, senior researcher at the National Institute of Public Health and adjunct professor at the faculty of medicine of the National University of Mexico. He was also awarded the position of national researcher. In 1992–1993, he was visiting professor at the Harvard Center for Population and Development Studies.

He is the author of 28 books and monographs and many articles in academic journals, as well as in cultural magazines and newspapers. He is also a member of the editorial boards of ten international journals and a member of twelve scientific and professional associations, including the National Academy of Medicine of Mexico and the United States Institute of Medicine.

In 2003, while serving as minister of health of Mexico, Frenk introduced Seguro Popular, a program of comprehensive national health insurance which expanded access to health care for tens of millions of previously uninsured Mexicans.[3] One test of any national healthcare delivery program is its durability after the key architects of the plan are no longer in power; Seguro Popular is still operating in late 2016.[4]

In 2004, Frenk was criticized by tobacco control advocates for cutting an unusual deal with tobacco companies. Philip Morris and British America Tobacco agreed to donate $400 million for health programs in Mexico over 2½ years, but reserved the right to cancel the donation if cigarette taxes were raised [5]

In September 2006, the Mexican government put Frenk's name forward as a candidate for the vacant position of director-general of the World Health Organization.[6] The British medical journal The Lancet published an editorial [7] endorsing Frenk as the best candidate, while The Wall Street Journal reported that the controversial tobacco deal could hurt his chances for election.[8] The WHO position was awarded to Dr. Margaret Chan in November 2006.

After failing to win the WHO post, Frenk assumed the position of head of the Carso Health Institute, a private, nonprofit center aimed at helping Latin America's poor.

In July 2010, Frenk joined the board of the Commonwealth Fund.[9]

Julio Frenk is officially installed as the 6th president of the University of Miami on January 29, 2016.

Frenk assumed the presidency of the University of Miami, on August 16, 2015, a position formerly held by Donna Shalala.[10][11] He was officially inaugurated on January 29, 2016.[12] He co-edited a collection of nonfiction essays on the subject of global health entitled "To Save Humanity," which includes work from contributors as varied as President Michelle Bachelet, Larry Summers, Elton John, and himself. [13]

On July 2005, Frenk met the opposition of Interior Secretary Carlos Abascal, a conservative Catholic, because of the decision of the Ministry of Health to distribute the morning-after pill at government health clinics.

Shortly after Norberto Rivera Carrera, the archbishop of Mexico City, declared that the introduction of the pill should not be made without public debate, Abascal announced debates would be held. However, Frenk denied the existence of any planned reversal of the distribution of the pill. Women's rights groups applauded the decision, while anti-abortion activists and the Catholic Church strongly denounced the pill, as abortive.